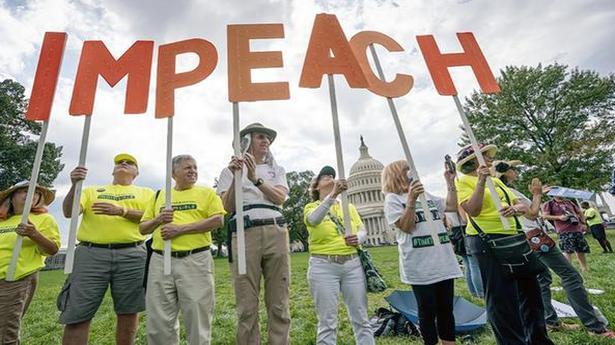 Democrats vowed on Friday to move quickly on the impeachment investigation of U.S. President Donald Trump, saying the evidence of abuse of power from his Ukraine phone call and attempts to cover up wrongdoing were already clear.

An intelligence whistleblower’s complaint showing Mr. Trump pressuring Ukraine’s President to supply dirt on election rival Joe Biden left the White House reeling and Mr. Trump doubling down with an implicit threat against witnesses to the call. “The clarity of the President’s actions is compelling and gave us no choice but to move forward,” said House Speaker Nancy Pelosi.

She announced that House Intelligence Committee Chairman Adam Schiff, who accused Mr. Trump of acting like a “mafia boss” this week, would take the lead in the investigation.

“They will take the time that they need and we won’t have the calendar be the arbiter,” she said in an interview with MSNBC. “But… it doesn’t have to drag on.”

On Monday, Mr. Trump blithely swatted away a whistleblower report that alleged that he sought to pressure Ukraine for information that could damage Mr. Biden, the leading Democratic candidate to contest the presidency in 2020.

Ms. Pelosi was pushing back against mounting pressure in her party to impeach Mr. Trump. But the tables have turned with the release of a memo on Mr. Trump’s July 25 call with President Volodymyr Zelensky, which confirmed that he pressed for dirt on the Bidens, followed by the whistleblower’s complaint, which alleged the White House had attempted to cover up the call.

Democrats now appear able to muster the majority they need to vote through an impeachment motion in the House — for only the third time in U.S. history — setting the stage for a possible trial of the President by the Republican-controlled Senate.

“We should move quickly but not hurriedly, and we should focus on this Ukraine call,” Eric Swalwell, a member of the House Intelligence Committee, said on CNN Friday.

“We don’t need to have a months-long hearing… We have the President’s own words, and we have his conduct after the fact,” he said, referring to Mr. Trump’s attack on the still anonymous whistleblower and other potential White House witnesses against him, labelling them spies and traitors.

“You know what we used to do in the old days when we were smart? Right? The spies and treason, we used to handle it a little differently than we do now,” Mr. Trump told U.S. diplomats in a meeting at the UN. Mr. Swalwell said the remarks, made on Thursday to a crowd from the U.S. Mission to the UN, showed “a consciousness of guilt. Innocent people don’t talk that way.”

Trump calls impeachment inquiry against him a ‘lynching’

U.S. President Donald Trump on Tuesday likened the impeachment investigation against him to a “lynching,” a racially charged word from the darkest days of America’s slavery legacy. There was an immediate backlash to Mr. Trump’s tweet in which he claimed that impeachment was unfair and stripping him of his legal rights. “All Republicans must remember […]

The administration will also take steps to stem the rising tide of hate and bigotry. Source: thehindu.com Related