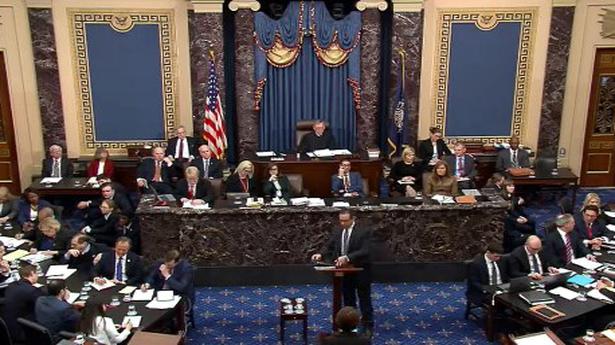 President Donald Trump’s lawyers on Saturday argued a robust version of one of his favourite phrases to tweet- “Read the transcript!”

It was the first day of defence arguments in President Trump’s impeachment trial as the Senate gathered for two quick hours in a rare Saturday session. The White House lawyers had said it would be a “sneak preview” of their defence, continuing Monday, and they spent the morning rebutting the House impeachment managers’ arguments by charging that they were politically motivated.

To begin, they read parts of a rough transcript of a July call between Mr. Trump and Ukrainian President Volodymyr Zelenskiy that is at the heart of the House impeachment case. While Democrats point to the conversation as a prime reason to remove the President, the White House lawyers say it points to his innocence. Mr. Trump often tweets, sometimes in all caps, that people should read the transcript in an effort to clear himself.

The House is charging that Mr. Trump abused power in a broad campaign to push Ukraine to investigate Democrats, including presidential candidate Joe Biden and his son Hunter Biden. They point to the July call, in which Mr. Trump asked Zelenskiy to probe Biden. At the time, the President had ordered the U.S. to withhold military aid from Ukraine.

The defence argued that there’s no evidence that the military aid was a “quid pro quo” for the investigations. They said Mr. Trump was concerned about general corruption in the country and noted he eventually released the aid. Deputy White House Counsel Michael Purpura argued that everyone knows that when the President asked Mr. Zelenskiy to “do us a favour,” he meant the U.S., not himself. Democrats have disagreed and said he didn’t release the aid until he “got caught.”

The President’s defense team used just two hours of the senators’ time on and promised not to run out the 24-hour clock allotted for the days ahead the way House Democrats nearly did prosecuting the case.

The White House team also displayed quick-cut video presentations on the Senate’s overhead screens, turning soundbites from key players in the impeachment case into fast-snapping clips. It all seemed to command the attention of senators, likely a welcome change of pace for those who had grown tired of the prosecution’s long and often repetitive presentations.

Trump lawyer Jay Sekulow gave his word to the senators, “We’re not going to play the same clips seven times.” That prompted smiles from some senators. The President’s team arrayed in the well of the chamber also looked different than the House managers — defending Mr. Trump were four white men. One woman, attorney Pam Bondi, is also on the team. The seven-person House manager team reflected a cross section of America that included women and people of color.

On Saturday the counsel’s table was without its TV-famous lawyers, Alan Dershowitz and Ken Starr, who have yet to appear before the Senate but are expected on Monday.

In arguing that the Democrats’ case is politically motivated, the White House lawyers focused on the person who has been at the head of the inquiry — lead impeachment manager and House Intelligence Committee Chairman Adam Schiff, D-Calif.

As part of their presentation, they played video of one of Mr. Schiff’s opening statements during a hearing early in the impeachment probe. In the statement, he parodied Mr. Trump’s push for the investigations, comparing it to a mafia shakedown. Republicans, and Mr. Trump in particular, have focused on the monologue and said Mr. Schiff made up a conversation that didn’t exist.

Mr. Schiff, in the chamber as as a prosecutor in the impeachment trial, looked straight ahead as they played the video, sitting just feet from the lawyers. The lawyers also played video of Mr. Schiff saying early in the investigation that the Intelligence Committee hadn’t had any contact with the whistleblower who first revealed the call between Mr. Trump and the Ukrainian President. In fact, the whistleblower had talked to committee staff. Mr. Schiff later said he should have been clearer in his comments.

After the session adjourned , Mr. Schiff said the defence was employing an old courtroom trick. “When your client is guilty, when your client is dead to rights, you don’t want to talk about your client, you want to attack the prosecution,” he said.

Not quite high fives, but handshakes

As the Senate adjourned, several Republican senators, some closely allied with the President, made their way to the defence counsel’s table to shake their hands. Sens. Lindsey Graham of South Carolina, John Barrasso of Wyoming and Mike Lee of Utah stopped by.

Mr. Sekulow and Mr. Purpura walked through an aisle greeting more senators as the cameras shut off, including John Thune of South Dakota. Sekulow also checked in with the chairman of the Senate Foreign Relations Committee, Jim Risch of Idaho.

One GOP senator mentioned in the impeachment inquiry Ron Johnson of Wisconsin, engaged for several minutes in conversation with the counsel team. Last year, Johnson attended Ukraine President Volodymyr Zelenskiy’s inauguration with other U.S. officials and was cited in the House proceedings as having discussed the Ukraine situation with Trump.

The Trump team’s outreach did have some bipartisan moments. At one point, White House counsel Pat Cipollone chatted extensively with Sen. Tim Kaine, D-Va., and later appeared to be lingering to say hello to Sen. Amy Klobuchar of Minnesota, a Democratic presidential candidate.

Coronavirus | Mexico prepares to reopen half the country amid pandemic

A ruling by a US judge granting bond on Friday to a former Twitter employee accused of spying for Saudi Arabia was stayed after US prosecutors said that they appealed the decision. Magistrate Judge Paula McCandlis, of the US District Court in Seattle, granted Ahmad Abouammo, 41, bond with travel restrictions while he awaited trial. […]

UK is likely to face a general Election this December, first since 1923. The confirmation on this and the clarity on the dates could come by Wednesday. However, it will most likely be on December 10 or 11 December. That being the case, the Parliament should be dissolved in the next few days only to […]