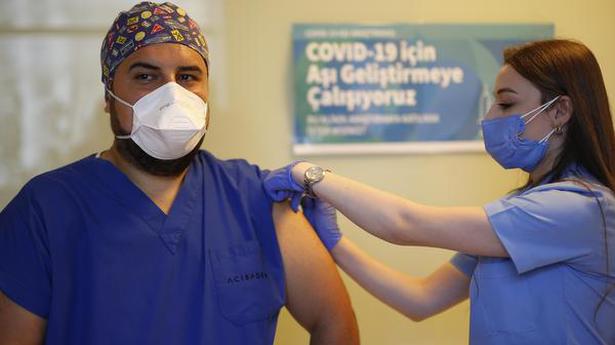 The first shipment of the inactivated vaccine will arrive in Turkey after Dec. 11.

Turkey has announced a vaccination plan starting with an experimental “inactivated vaccine” later this month to combat the COVID-19 pandemic amid a surge in infections and deaths.

Turkish health minister Fahrettin Koca had previously announced an agreement with Chinese biopharmaceutical company Sinovac Biotech for 50 million doses of CoronaVac, which is currently in Phase 3 trials. Mr. Koca said in a statement late Wednesday that the first shipment of the inactivated vaccine will arrive in Turkey after Dec. 11.

The minister said early use authorization would be granted after Turkish labs confirm vaccine safety and initial results from Phase 3 trials are assessed.

“If developments continue positively as we expect, Turkey would be among the first countries in the world to begin vaccinations in the early phase,” Mr. Koca said.

Vaccination efforts would be rolled out in four stages, the minister said. The first group includes health care workers, citizens above age 65, and people living in homes for the elderly, disabled or other protective care homes.

The CoronaVac will be delivered in two doses per person.

Turkish President Recep Tayyip Erdogan said on Monday the vaccine would be administered free of charge. Other COVID-19 vaccines would be sold at pharmacies, according to the health minister.

“We will take delivery of at least 10 million doses of the vaccine in December and likely 20 million. Another 20 million doses in January and 10 million in February,” Mr. Koca said earlier this week. Turkey’s population is more than 83 million.

Mr. Koca had previously announced an agreement for 1 million doses of the Pfizer-BioNTech vaccine to be delivered in December. He said Wednesday that negotiations were ongoing for more vaccines that introduce a so-called messenger RNA, or mRNA, sequence coded for a disease specific antigen, which prompts the body to have an immune response.

RNA vaccines work by introducing an mRNA sequence (the molecule which tells cells what to build) which is coded for a disease specific antigen, once produced within the body, the antigen is recognized by the immune system, preparing it to fight the real thing.”

Turkey was included in the trial phases of both vaccines and is also developing a local vaccine. Vaccine trials usually take years but have been drastically sped-up in wake of the global pandemic.

Turkey has reported record fatalities for 10 consecutive days, with 193 new deaths Wednesday, bringing the total death toll in the country to 14,129.

The daily number of infections has also hit a record high of 31,923, as Turkey resumed reporting all positive cases last week after four months of only releasing the numbers of symptomatic patients. The new daily infection numbers put Turkey among the worst-hit in the world.

U.S. President Donald Trump, who lost the 2020 elections, continue to make unsubstantiated claims of voter fraud. The 2020 U.S. presidential elections were probably the least secure American polls ever, President Donald Trump alleged on Sunday, a repeated claim which has found very few takers and has, so far, not been able to stand legal […]

Japan on Friday revised a roadmap for the clean-up of the tsunami-wrecked Fukushima nuclear plant, further delaying the removal of thousands of spent fuel units that remain in cooling pools since the 2011 disaster. It’s a key step in the decades-long process, complicated by high radiation and other risks. The government and the plant operator, […]