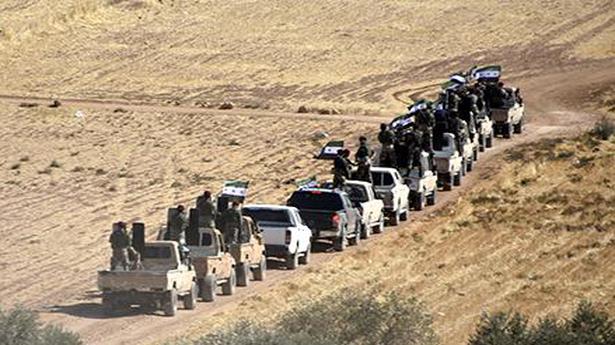 Turkish and allied forces faced stiff Kurdish resistance on Friday as they battled to seize key Syrian border towns, on the third day of a broad offensive that has sparked a civilian exodus.

President Donald Trump, whose order to pull back U.S. troops from the border this week effectively triggered the invasion, said Washington.

The third such Turkish operation since the start of the war in Syria, was met with fierce international condemnation, including among Mr. Trump’s own allies.

The risk that thousands of the jihadists they still hold could break free on the back of the Turkish assault could yet spur the international community into action.

“There is heavy fighting between the SDF and the Turks on different fronts, mostly from Tal Abyad to Ras al-Ain,” the Syrian Observatory for Human Rights said, referring to the Syrian Democratic Forces, a Kurdish-led militia.

“The SDF are using tunnels, trenches and berms” in their defence operations, the Observatory said.

The monitor said four civilians were killed in Tal Abyad when an air strike hit the car in which they were fleeing , while another three were shot dead by snipers around the border town. That brings the civilian death toll to 17 on the Syrian side, while seven have been killed in Turkey.

Indian peacekeepers, who supported the Haitian Police for over a decade and are departing from Haiti as the UN mission closes in October, have won laurels for their commendable service and for going beyond the call of duty to serve the people in the Caribbean country. The Indian Formed Police Unit (FPU), deployed with the […]