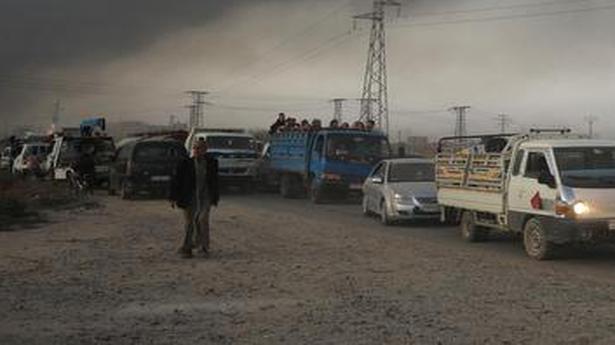 Turkish-backed Syrian rebels seized control of the centre of the Syrian border town of Ras al-Ain town on Saturday, a senior Turkish security official said, as Turkey’s offensive against a Kurdish militia in the region entered its fourth day.

“The (Syrian rebel) national army took control of the town centre this morning. Inspections are being conducted in residential areas,” the official told Reuters.

Turkish forces had overnight stepped up their bombardment of Ras al Ain in their incursion, after U.S. troops in the region came under artillery fire from Turkish positions.

The United States has ramped up its efforts to persuade Ankara to halt the offensive against the U.S.-backed Kurdish YPG forces, saying Ankara was causing “great harm” to ties and could face sanctions.

Turkey launched its incursion after U.S. President Donald Trump spoke by phone on Sunday with Turkish President Tayyip Erdogan and withdrew U.S. troops who had been fighting alongside Kurdish forces.

There has been fierce international criticism of the assault and concern about its humanitarian consequences. The Syrian Kurdish-led administration said nearly 200,000 people have been displaced as a result of the offensive.

Erdogan dismissed the mounting criticism of the operation and said on Friday evening that Turkey “will not stop it, no matter what anyone says”.

Kurdish forces in northeastern Syria, however, denied claims by the Turkish defence ministry that its forces had taken the battleground border town of Ras al-Ain, the first in its four-day-old offensive.

“Ras al-Ain is still resisting and clashes are ongoing,” said an official of the Kurdish-led Syrian Democratic Forces.

An AFP correspondent in the area said Turkish troops and allied Syrian rebels had entered the town but had yet to capture it.

The Britain-based Syrian Observatory for Human Rights too reported that the town, a major target of the Turkish offensive, had yet to be overrun.

Thick plumes of smoke rose around Ras al Ain, one of two Syrian border towns targeted in the offensive, on Saturday as Turkish artillery pounded the area, said a Reuters reporter across the frontier in the Turkish town of Ceylanpinar.

Intense gunfire also resounded from within Ras al Ain while warplanes could be heard flying overhead.

It was quieter at Tel Abyad, the operation’s other main target some 120 km (75 miles) to the west, with only occasional shelling heard in the area, another Reuters reporter said.

The Turkish-backed Syrian rebels said earlier they had cut the road which connects Ras al Ain and Tel Abyad and had captured 18 villages since the operation began. Officials with the Kurdish-led Syrian Democratic Forces (SDF) could not immediately be reached for comment.

On Friday, the Pentagon said U.S. troops came under artillery fire from Turkish emplacements though none of its soldiers were wounded near the Syrian border town of Kobani, 60 km (37 miles) west of the main area of conflict.

Turkey’s Defence Ministry said its forces did not open fire at the U.S. base and took all precautions to prevent any harm to it while it was responding to fire from a nearby area by the Kurdish YPG militia, which Ankara regards as a terrorist group.

Malaysia’s leader-in-waiting Anwar Ibrahim will not face charges over claims he sexually assaulted a male former aide, prosecutors said Tuesday, the latest such scandal to tarnish the veteran politician’s career. Muhammed Yusoff Rawther, last month, accused Mr. Ibrahim of trying to force him to have sex and filed a police complaint, but officials said there […]

US: Restaurants and racing can resume, but new rules abound in New Orleans

US: Restaurants and racing can resume, but new rules abound in New Orleans Source: indiatoday.in Related

Iraqi protesters stepped up their demonstrations on Tuesday with the authorities in Baghdad increasingly paralysed as they seek a way out of a political impasse. Once again the capital’s iconic Tahrir Square began filling early in the day, with protesters making clear their opposition to names touted by the establishment to fill the post of […]