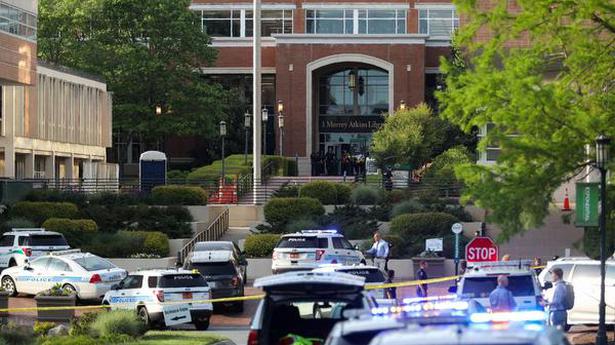 Two people were killed and four others wounded, three critically, in a shooting at the University of North Carolina at Charlotte, officials said.

Police said one suspect, who some local media reported was a student at the school, was taken into custody following the rampage on the last day of classes for the academic year. Final exams were scheduled for next week.

Charlotte-Mecklenburg Police Department spokeswoman Sandy D’Elosua said the individual who was arrested was believed to have acted alone. Television station WBTV in Charlotte reported that gunfire erupted about 5:45 p.m. (21:45 GMT) on Tuesday near the university’s Kennedy Hall administrative building, and that one person had been arrested.

“We are in shock to learn of an active shooter situation on the campus of UNC Charlotte. My thoughts are with the families of those who lost their lives, those injured, the entire UNCC community and the courageous first responders who sprang into action to help others,” Charlotte Mayor Vi Lyles said on Twitter.

Susan Harden, a professor of education on campus since 2011 who also serves on the Mecklenburg County Board of Commissioners, expressed disbelief at the gun violence. “This is a day at the end of the semester, when students are doing performances, presentations … this is just the worst thing, said Harden said at the police staging area. Our campus is so safe. So safe. I have never felt unsafe on our campus. I’m heartbroken. I have got a student whose barricaded in her dorm right now.”

Mecklenburg Emergency Management Services, an independent agency that handles emergency services for the county, confirmed on Twitter that two people were dead on the scene and that four others were taken to a hospital, two of them with life-threatening injuries.

WSOC-TV reported that the shooter was a student at the University. The suspect was not immediately identified by police, who set up a media staging area near the school.

“Run, Hide, Fight. Secure yourself immediately,” the university said on Twitter shortly before 6 p.m. The school said later on its website the campus was on lockdown and that students and staff should remain in a safe location.

Video footage aired on local television and posted to social media showed scenes – increasingly familiar with the rise of school gun violence in the United States – of students evacuating campus buildings with their hands raised as police officers ran past them toward the scene of the shooting.

A spokeswoman for the Charlotte-Mecklenburg Police Department confirmed there had been an active shooter at the university but declined to give any further information. According to its website, the University of North Carolina at Charlotte enrolls more than 26,500 students and employees 3,000 faculty and staff.

The deadliest mass shooting on a campus of higher education in the United States took place at Virginia Tech University in Blacksburg, Virginia, on April 16, 2007, when a South Korean student killed 32 people in a shooting rampage, before killing himself.

India granted permission for Pakistan Foreign Minister Shah Mehmood Qureshi’s aircraft to fly over the country for his visit to Male and Colombo, a gesture that would be reciprocated by Pakistan for External Affairs Minister Sushma Swaraj a fortnight later, despite a ban by Pakistan on the use of its airspace for flights approaching from […]

The U.S. is poised to evacuate about 1,000 U.S. troops from northern Syria amid an ongoing Turkish offensive into the region, Defence Secretary Mark Esper said on Sunday, calling the situation “untenable” for U.S. forces. The withdrawal of the troops from the region comes after U.S. President Donald Trump abruptly shifted policy and withdrew some […]

Peru is lurching into a new period of political uncertainty on Tuesday after President Martţn Vizcarra dissolved the opposition-controlled congress and called new elections that he contends are needed to uproot the nation’s endemic corruption. Renegade lawmakers defied the chief of state, staying in their seats late into the night and even voting to suspend […]