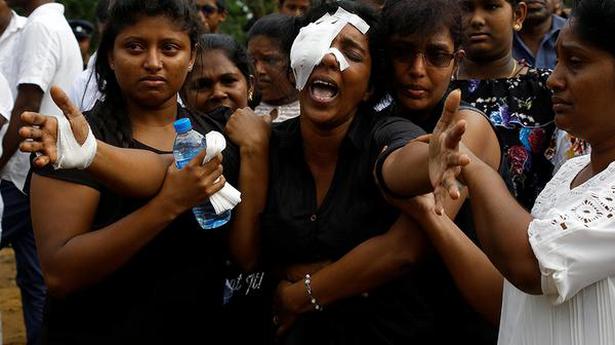 Two suspects involved in the deadly Easter attacks in Sri Lanka are Islamic State (IS) returnees from Syria and Iraq, investigators have found.

The suspects’ exact role in planning and executing the ghastly serial bombings remains unclear, but Sri Lankan intelligence has established that the two young men were IS-trained, The Hindu learns from a Colombo-based source who was part of a recent, high-level discussion on the attacks. “Now the pieces of the puzzle should start coming together,” the source said, requesting anonymity.

Two years ago, Sri Lanka highlighted over 30 of its youth joining IS in Syria. They came from “well-educated, affluent families”, the then Justice Minister told Parliament in November 2016. But in the three years since, Sri Lankan authorities have made no public mention of any threat from radical Islamist forces in the island.

Not even when they arrested a group of Muslim youth last December for vandalising Buddha statues. They suspected that the youth had links with militant organisations abroad, but the findings since are unclear to many, the source said.

However, the lead that investigators have now obtained could potentially help Sri Lanka ascertain how the local National Thowheed Jamaath may have worked with the IS, which has claimed responsibility for the eight explosions that killed 350 people, including 45 children, on Sunday.

Further, the jackets used by the suicide bombers were ‘typically used’ by the IS, a source said.

So far Sri Lanka’s investigating agencies have identified 139 persons as members of the NTJ and associated groups and “traced all of them”, an official Colombo-based source said. “It is believed that not all of them are militant, but details of their possible role in the attacks are still emerging.”

Meanwhile, Sri Lanka’s Criminal Investigation Department (CID) has also established that nine suicide bombers, including a woman, were part of the team that executed the deadly serial blasts. The identity of all but one of them has been established, according to State Minister of Defence Ruwan Wijewardene.

“A total of 60 suspects have been arrested so far,” police spokesman Ruwan Gunasekara said. The CID, which is chiefly investigating the attacks, is interrogating at least 32 suspects now, while the rest are in custody at different police stations.

Investigators are also studying if suspects had been moving about in the region in the recent past, official sources said.

Meanwhile, eight countries are said to be actively supporting Sri Lanka in its investigations and response to the mass atrocity, the biggest the island has witnessed in its post-war decade. Briefing Colombo-based diplomats recently, President Maithripala Sirisena described them as “very powerful countries” with “extensive technological and military knowledge,” a diplomatic source said, requesting anonymity.

The FBI, Interpol, and teams from the UK and Australia are now in Colombo to assist with the investigations, authorities said.

Further, President Sirisena spoke of Sri Lanka having received prior intelligence on the attacks from “a friendly country.”

Early April, India had alerted Sri Lanka on the imminent threat, but both President Sirisena and Prime Minister Ranil Wickremesinghe said they were personally unaware of the warning, though their intelligence officials had the input. President Sirisena, who has vowed ‘strict action’ on relevant officials who failed to pass on the intelligence to him, has decided to overhaul the security apparatus.

Minister Wijewardene, who said he was also not informed of the threat, admitted to a “major lapse” on the part of the government in intelligence sharing.

“The government has to take responsibility,” he said.

Pakistan on Friday observed “Kashmir Hour” to express “solidarity” with the Kashmiri people after India revoked the special status of Jammu and Kashmir. Sirens blared across the country as the clock struck noon and traffic signals turned red on all roads of the federal capital Islamabad. The main event was held at Islamabad’s Constitution Avenue […]

U.S. Commission on Religious Freedom to hold hearing on citizenship laws next week

A U.S. commission on international religious freedom will hold a hearing next week on how citizenship laws in countries like India and Myanmar are leveraged to deny the religious minorities legal protection, making them vulnerable to exploitation, discrimination and mass atrocities. The announcement of the U.S. Commission on International Religious Freedom (USCIRF) came amidst the […]

The German city where the Bauhaus was born a century ago is paying tribute to the school behind a string of modern design icons with a new museum opened on Friday meant to anchor it in its turbulent historical context. The Bauhaus Museum in Weimar, a functional but elegant concrete cube designed by German architect […]