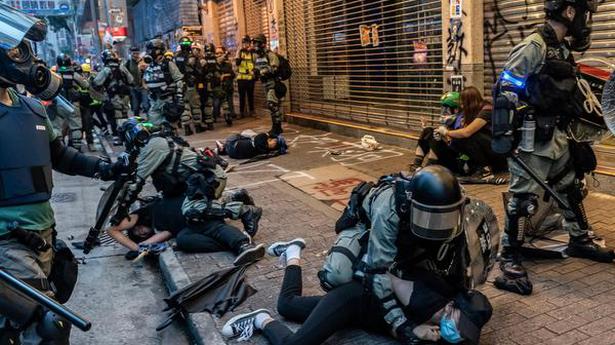 An 18-year-old student and a 38-year-old unemployed woman were the first to be prosecuted under the Hong Kong’s mask ban, which came into force Saturday under sweeping emergency powers aimed at quashing violence in the protests for more democratic freedoms.

Detained early Saturday shortly after the ban took effect, the two were also charged with taking part in unlawful assembly, which carries a heavier penalty of up to five years in jail. A conviction under the mask ban is punishable by up to a year in prison and a fine. They were both released on bail pending trial.

The protest were sparked by a proposed law that would have allowed some criminal suspects to be sent to mainland China for trial, but have since morphed into a larger anti-government movement. Protesters are upset at what they say are Beijing’s increasing influence over the former British colony, which was promised a level of autonomy when it was handed back to Chinese rule in 1997.

It also drew a first warning from the Chinese military after protesters pointed lasers at one of its barracks in Hong Kong. Police said rioters also attacked bystanders, including two men left unconscious after bloody beatings and a woman who took photos of rioting.

In a statement Monday, police said the “public order of the whole city is being pushed to the verge of a very dangerous situation.” The chaos has led many shops and public services to shutter and panic buying in some areas.

The city’s MTR network of subways and trains was entirely closed Saturday and partially reopened Sunday but was quickly targeted again by protesters. Most stations remained closed Monday amid fears of more protests.

Hong Kon’s Chief Executive Carrie Lam has said that the mask ban will make the identification of rioters easier for police and that other measures are possible if violence continues.

Ms. Lam has said she will seek the legislature’s backing for the mask ban when it meets next on Oct. 16.

A police official who spoke on condition of anonymity said 13 people were detained on Saturday for violating the ban and other offences but couldn’t say how many more were arrested on Sunday.

Saudi Arabia released images of King Salman carrying out his royal duties on Sunday, after a stunning purge of at least two Princes, including his brother and nephew for allegedly plotting a coup. Saudi royal guards on Friday detained the trio in a move that signals Crown Prince Mohammed bin Salman’s tightening grip on power. […]