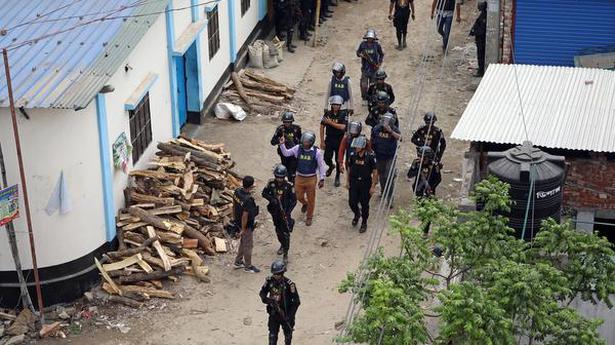 Two suspected militants were killed on Monday after they blew themselves up during a raid at their hideout by the Bangladesh’s elite anti-terrorism unit in Mohammadpur area in Dhaka, officials said.

The Rapid Action Battalion (RAB) surrounded a single-storey tin-shed house in Mohammadpur’s Basila area, on the outskirts of Dhaka, following a tip off.

The personnel of the elite anti-crime and anti-terrorism unit met with gunfire, followed by a powerful blast, they said.

“We, overnight, laid a siege to the house. They [suspected militants] staged a blast early on Monday in which at least two of them were killed,” a RAB spokesman said.

He said that those living in the neighbourhood were evacuated ahead of the raid.

According to witnesses, the blast was so powerful that it shook the whole area. A fire also broke out following the blast and fire-fighters were called in to douse the blaze.

RAB chief Benazir Ahmed said that at least two (suspected) militants have been killed in the blast.

“The bodies have been blown apart in the explosions which will require DNA profiling for their identification,” Ahmed told reporters.

The RAB has detained the owner of the house, its caretaker and his wife and an imam of a nearby mosque for questioning, according to media reports.

The house owner reportedly told the RAB that two persons, who identified themselves as van drivers, had rented the house a few months ago and were supposed to vacate it this month.

The RAB did not immediately made it clear that to which terror group the suspected militants were associated with.

Bangladesh launched a crackdown on Islamist militants following the July 2016 terror attack in which terrorists stormed a Dhaka cafe and killed 22 people, including 18 foreigners, by firing indiscriminately.

In a nationwide raids since then, the security forces have killed around 100 terrorists and detained several others.

Hit by regulators and political pressure, Facebook is reportedly planning to now offer digital versions of government-backed currencies, including the US dollar and the euro, apart from the cryptocurrency Libra. According to a report in The Information on Tuesday, the social networking giant would also delay the roll out of its digital currency by several […]

India’s outreach to the East and an escalating trade war between China and the United States is helping to turn the Bay of Bengal coastline into a new and attractive growth engine. In the backdrop of Shanghai, Guangzhou and Shenzhen — coastal cities which propelled China’s rise as the workshop-of-the world — India too appears […]