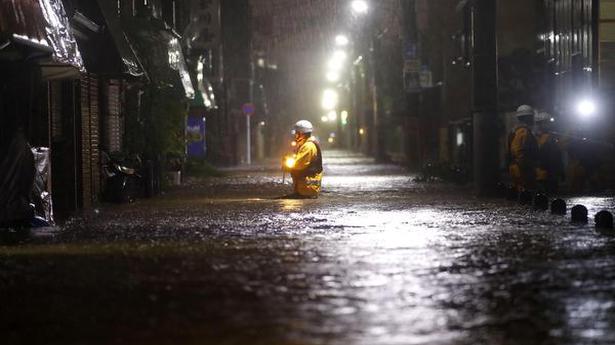 One of the most powerful typhoons to ever hit Tokyo paralysed the Japanese capital on Saturday, leaving millions confined indoors and streets deserted as fierce rain and wind killed two, flooded rivers and threatened widespread damage.

A 50-year-old man was killed near Tokyo early on Saturday in a car overturned by punishing winds, while another person died after being washed away in a car, public broadcaster NHK said. Nine people remain missing in landslides and flooding, it said.

Authorities issued evacuation advisories and orders for more than 6 million people across the country as the storm unleashed the heaviest rain and winds in years. Some 80 injuries have been reported so far, while more than 2, 70,000 households lost power, NHK said.

The storm, which the government said could be the strongest to hit Tokyo since 1958, brought record-breaking rainfall in many areas, including the popular resort town of Hakone, with a whopping 939.5 mm (37 inches) of rain over 24 hours.

Typhoon Hagibis, which means “speed” in the Philippine language Tagalog, made landfall on Japan’s main island of Honshu on Saturday evening. A magnitude 5.7 earthquake shook Tokyo shortly after.

Even as the typhoon moved away from the capital late on Saturday, one expert warned of further flooding as several surrounding prefectures began releasing water from dams, letting it flow downstream.

“The situation is now worse than this evening,” Nobuyuki Tsuchiya, director of the Japan Riverfront Research Center, told Reuters. About 1.5 million people in Tokyo live below sea level.

“Damage from floods and landslides is likely taking place already,” an agency official told a news conference carried by NHK. “It is critical that people take action urgently to protect their lives and the lives of loved ones.”

Tokyo’s Haneda airport and Narita airport in Chiba both stopped flights from landing and connecting trains were suspended, forcing the cancellation of more than a thousand flights.

Train operators suspended bullet train services extensively, while many train and subway lines in Tokyo were also down for most of Saturday. Usually bustling entertainment and shopping districts such as Shibuya and Ginza were deserted.

Yuka Ikemura, a 24-year-old nursery school teacher, was in one such facility at a community centre in

Japanese Formula One Grand Prix organisers cancelled all practice and qualifying sessions scheduled for Saturday. Two matches of the Rugby World Cup due to be played on Saturday were also cancelled.

About 30 doctors from Albania, one of Europe’s poorest countries, were at work in northern Italy on Monday helping overwhelmed hospitals at the epicentre of the coronavirus pandemic. One of the doctors said he was simply following the Hippocratic Oath that medics have taken through the ages vowing to help their colleagues in need. “In […]

Sri Lanka’s former wartime defence chief Gotabaya Rajapaksa has won the Sri Lankan presidential elections with 52.25 per cent votes, the official release said. Rajapaksa, who oversaw the military defeat of Tamil separatists under his brother and then president Mahinda Rajapaksa 10 years ago, has promised strong leadership to secure the island of 22 million […]

A cargo ship rocketed toward the International Space Station on Saturday, carrying candy and cheese to satisfy the astronauts’ cravings. Northrop Grumman launched its Cygnus capsule from the Virginia seashore. The nearly 4-ton shipment should arrive at the orbiting lab Tuesday. It took three tries over the past week to get the Antares rocket off […]