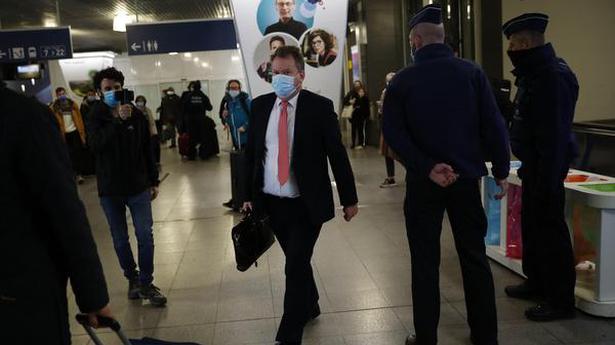 The U.K. and European Union (EU) are holding crunch talks on December 6 to give one last push to try and thrash out a post-Brexit trade agreement before the end of the transition period on December 31.

British Prime Minister Boris Johnson and European Commission President Ursula von der Leyen spoke on the telephone on December 5 to try and find a way out of a stalemate that has lasted months, ending in the chief negotiators on both sides concluding the latest round of talks without achieving a breakthrough.

There are lingering divergences on key areas of EU fishing rights in U.K. waters and governance matters after Britain ceases to be a member of the economic bloc from January 1, 2021.

“In a phone call on the ongoing negotiations between the European Union and the United Kingdom, we welcomed the fact that progress has been achieved in many areas. Nevertheless, significant differences remain on three critical issues: level playing field, governance and fisheries. Both sides underlined that no agreement is feasible if these issues are not resolved,” read a joint statement issued by Mr. Johnson and Ms. von Der Leyen.

“Whilst recognising the seriousness of these differences, we agreed that a further effort should be undertaken by our negotiating teams to assess whether they can be resolved. We are therefore instructing our chief negotiators to reconvene tomorrow [Sunday] in Brussels. We will speak again on Monday evening,” they said.

Lord David Frost, the U.K.’s Brexit negotiator, and his team travelled back to Brussels to resume a final set of talks with EU chief negotiator Michel Barnier and his team to try and find a way through the significant differences that remain in the path to a deal.

The key focus is over access to U.K. waters by the EU’s fishing fleets. According to reports, France is leading the charge in this area and demanding rights for at least 10 years — a demand the U.K. is unwilling to give in to, claiming it fails to meet its take back control criteria for leaving the bloc. Other stumbling blocks include what measures there should be to ensure a “level playing field” for businesses on both sides of the English Channel and the role of the European Court of Justice.

If a deal is not reached before the December-end deadline, border checks and taxes will be introduced for goods travelling between the U.K. and the EU. It would have a far-reaching impact on the way business and trade is conducted in Europe after the U.K. voted in favour of Brexit in a June 2016 referendum.

‘The Sunday Times’ highlights the plight of animals in London Zoo, whose travel to neighbouring EU countries for species-protecting mating has to be expedited to ensure they don’t get stuck in transit. Three Asiatic lioness sisters, Rubi, Heidi and Indi, are heading for a new home in Germany to find a new mate after they had failed to breed in London with Bhanu, the resident male.

“We’d all rather hoped that some magic would happen, but unfortunately the laws of attraction are not always that straightforward,” said London Zoo CEO Kathryn England.

“It is important that the magic does happen because the Asiatic lion is limited to a very small part in the wild in the Gir national park in India. The breeding of this population is critical,” she said.

The lionesses will set off on December 21 for their new home at Schwerin Zoo, where Heidi and Indi, both 9, will be encouraged to mate with a male expected to be brought from France. There are no plans for Rubi, 11. Bhanu, meanwhile, will be joined a week later in London by a new female, Arya, from Paignton Zoo in Devon, south-west England.

According to the newspaper, the need to travel before the end of the year has imposed considerable strain on London Zoo, which is involved in breeding programmes for about 160 species that move between locations.

Tim Schikora, director of Schwerin Zoo, said he had intended to welcome the lionesses just before the opening of a new enclosure to the public in March, but Brexit had forced a change of plan.

“We have to act now or else we could have a problem afterwards, he said.

At present, animals can be moved easily between zoos within the EU, but arrivals from beyond generally have to spend six months in quarantine before leaving and a further 30 days on arrival. Some non-member-state countries such as Norway have agreements in place to avert this hurdle.

“The problem with Britain is that nobody knows what the rules will be,” said Mr. Schikora.

This comes after a consortium of businesses decided to hit pause on advertising with Facebook in July, keeping in mind the social media platform’s inability to curb hate speech. (Subscribe to our Today’s Cache newsletter for a quick snapshot of top 5 tech stories. Click here to subscribe for free.) Pinterest Inc. and Snap Inc. […]