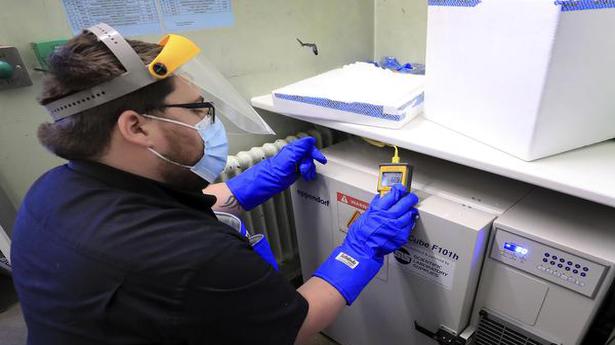 Health officials warned the nation’s biggest-ever inoculation drive would be a “marathon” stretching well into next year.

Britain geared up to become the first country to roll out the Pfizer-BioNTech coronavirus vaccine on Tuesday, as southern California locked down 20 million people to ease the burden on hospitals struggling with record cases.

U.K. health officials warned the nation’s biggest-ever inoculation drive would be a “marathon” stretching well into next year.

Health Secretary Matt Hancock is to have a jab live on television on “V-Day” to counter public doubts over the rapid approval.

California’s lockdown will see most offices close and gatherings from different households banned. Bars and services such as hair salons will be closed and restaurants only allowed to serve takeaways.

“We are at a tipping point in our fight against the virus and we need to take decisive action now to prevent California’s hospital system from being overwhelmed in the coming weeks,” said state governor Gavin Newsom.

He said introducing stay-at-home orders when spare capacity in intensive care units falls below 15% would help flatten the curve of infections.

The state is suffering record new cases with two days last week in which 113 deaths were registered, up from around 14 daily fatalities in early November.

The United States as a whole is seeing record infections, with the illness once again reaching President Donald Trump’s inner circle — his personal lawyer Rudy Giuliani the latest to test positive.

“This is not just the worst public health event. This is the worst event that this country will face,” Birx told NBC on Sunday.

In Europe, Chancellor Angela Merkel was also urging people to follow the rules and said German regions with high infection rates should tighten social contact curbs before Christmas, as the country struggles to tamp down its second wave.

Further south, Greece extended its restrictions until January 7 but Austrians got a boost when the government lifting its measures.

“We couldn’t wait with the shopping, even if it might be a bit crowded today,” Robert Bauer told AFP as he shopped in Vienna.

As Britain is mired in controversy over its rapid approval of the vaccine, Indonesia has received 1.2 million doses of a vaccine by Chinese firm Sinovac that is yet to clear the final regulatory hurdles.

China has, however, approved advanced candidates such as the Sinovac drug for emergency use.

China, which has largely brought the virus under control, has promised to make its vaccines available as a “global public good” after global criticism of its early handling of the pandemic.

The scramble to secure vaccines comes at an awkward time for the UK, with Brexit negotiations heading into the home straight with no deal still a looming possibility.

The government has reportedly put military flights on standby to transport more doses in case Brexit talks collapse and new rules cause border chaos from January 1.

At one hospital in Croydon, south of London, medical workers were carefully dealing with the first doses, which have to be kept at -70 degrees Celsius (-94 degrees Fahrenheit).

“To know that they are here, and we are amongst the first in the country to actually receive the vaccine and therefore the first in the world, is just amazing, I’m so proud,” said Louise Coughlan, a pharmacist at the hospital.

The Pfizer-BioNTech jab will be administered in two doses, three weeks apart. So Britain’s initial batch will cover 400,000 people, and the government has 40 million doses on order in total.

Health service chief Stephen Powis said Britain’s rollout would be a “marathon not a sprint”.

“Despite the huge complexities, hospitals will kickstart the first phase of the largest-scale vaccination campaign in our country’s history from Tuesday,” Powis said.

Queen Elizabeth II, 94, and her 99-year-old husband Prince Philip are reportedly in line to get the jab early because of their age.

The coronavirus has killed more than 1.5 million people since the outbreak emerged in China last December.

The relationship between India and Pakistan is “less heated” now than what was two weeks ago, United States President Donald Trump has said, reiterating his offer to help the two South-Asian neighbours only if both of them want.   The comments by Mr. Trump were his first and comes two weeks since his meeting with […]

Indian diaspora in Poland protest against CAA and NRC

A group of Indians living in Poland organised a protest along with Polish friends in Krakow, to show solidarity with the anti-CAA-NRC (Citizenship Amendment Act and National Register of Citizens) protests in India. Protesters said they were against the ‘unconstitutional and undemocratic law’ imposed by the BJP-led government and the protest was organised specially on […]

Turkey’s Parliament on Thursday authorised the deployment of troops to Libya to support the U.N.-backed government in Tripoli battle forces loyal to a rival government that is seeking to capture the capital. Turkish lawmakers voted 325-184 at an emergency session in favour of a one-year mandate allowing the government to dispatch troops amid concerns that […]