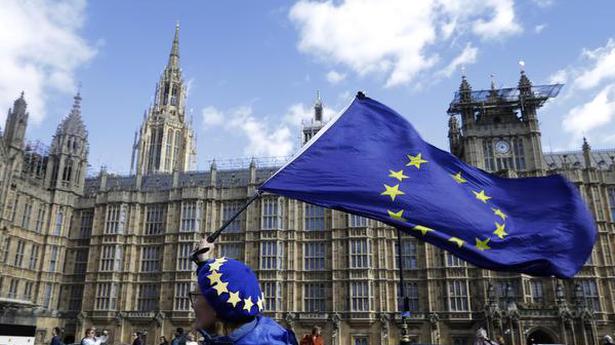 Britain has begun issuing passports with the words “European Union” removed from the front cover — despite Brexit being delayed and its political leaders deadlocked over how to extricate the country from the bloc. The Interior Ministry said on Saturday that a long-standing decision to start introducing passports without reference to the EU had gone ahead from March 30, the day after the original date for Brexit.

Prime Minister Theresa May has delayed leaving the bloc amid stubborn opposition in Parliament to the divorce deal she finalised with European leaders in November. MPs have overwhelmingly rejected the agreement three times.

Ahead of an EU summit on Wednesday, she was forced to ask them for another extension, until June 30, to prevent Britain departing with no deal at the end of next week. But with EU heads growing increasingly impatient at the political paralysis in Westminster, they could offer just a shorter postponement — or a longer period of up to a year. The other 27 members must give unanimous backing to any extension.

British Finance Minister Philip Hammond struck an optimistic tone at a meeting on Saturday of European Finance Ministers in Bucharest, telling reporters that there were “no red lines” in the ongoing discussions.

In an apt sign of the befuddling circumstances around Brexit, Britain’s Interior Ministry confirmed that some newly-issued passports now omit references to the EU atop the cover while others still bear the bloc’s name.

It said the discrepancy was due to an attempt to save public money and insisted both designs would be “equally valid for travel”. “In order to use leftover stock and achieve best value for the taxpayer, passports that include the words ‘European Union’ will continue to be issued for a short period,” a spokeswoman added.

British passports have become ensnared in the country’s Brexit divisions after the government announced in 2017 it would return to traditional blue passports “to restore national identity”.

The travel documents had dark blue covers from 1921, but Britain switched to burgundy from 1988, in common with other passports in what was then the European Community.

The U.S.’s primary legal professional association, the American Bar Association (ABA), has issued a statement saying India has violated its international treaty obligations in the case of Manipur journalist Kishorchandra Wangkhem, who has been imprisoned in Manipur since November 27, 2018 under the National Security Act. “A review of court records and Mr. Wangkhem’s statements […]

China reported 17 new cases of the mysterious SARS-like virus on Sunday, including three in a severe condition, heightening fears ahead of China’s Lunar New Year holiday when hundreds of millions of people move around the country. The virus — a new strain of coronavirus that humans can contract — has caused alarm because of […]