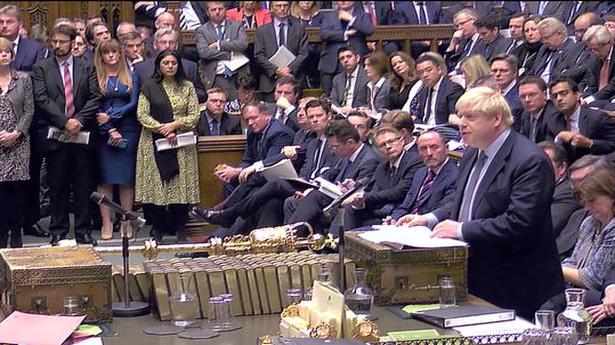 British lawmakers are holding their first weekend sitting in almost four decades to vote on whether to approve Prime Minister Boris Johnson’s Brexit deal with the European Union and finally let the U.K. leave the bloc at the end of this month.

At least, that’s the government’s plan. Some lawmakers have other ideas, and may yet delay the final decision more than three years after British voters opted to leave the 28-nation bloc.

Since striking a deal with the 27 other EU nations on Thursday, Mr. Johnson has been imploring and arm-twisting both Conservative and opposition lawmakers as he tries to win majority support for his deal.

Mr. Johnson’s Conservative Party holds only 288 seats in the 650-seat House of Commons, so he will have to rely on support from other parties and independent lawmakers to get over the line.

The result looks set to be close, although Mr. Johnson has had some success winning over both hard-core Conservative Brexiteers and a handful of opposition Labour lawmakers who represent pro-Brexit parts of the country.

Mr. Johnson hopes for success in getting a fractious Parliament to back the deal after his predecessor, Theresa May, failed three times to get lawmakers behind her plan.

As lawmakers gathered inside Parliament, their first Saturday sitting since the 1982 Falklands War, tens of thousands of anti-Brexit demonstrators were expected to march on the building, calling for a new referendum on whether to leave the EU or remain.

Saturday’s vote could still be derailed.

Many lawmakers want to rule out the possibility that Britain could crash out of the bloc without a deal on the October 31 deadline, a prospect economists say would disrupt trade and plunge the economy into recession. A proposed amendment to Saturday’s vote would withhold approval of the deal until all the necessary legislation to implement it has passed.

One of the lawmakers behind the measure, Oliver Letwin, said it would prevent the U.K. from leaving at the end of the month “by mistake if something goes wrong during the passage of the implementing legislation.”

If that amendment is chosen for a vote by House of Commons Speaker John Bercow and passes, Johnson will have to ask the EU for a delay to Britain’s departure date. Last month Parliament passed a law compelling the government to do that if no deal is approved by Saturday.

It would also give another chance to scrutinize and possibly change the departure terms while the legislation is passing through Parliament.

Mr. Johnson’s hopes of getting the deal through Parliament were dealt a blow when his Northern Ireland ally, the Democratic Unionist Party (DUP), said it would not back him. The party says Mr. Johnson’s Brexit package, which carves out special status for Northern Ireland to keep an open border with EU member Ireland, is bad for the region and its bonds with the rest of the U.K.

“We will not be supporting the government, we will be voting against,” said the party’s deputy leader, Nigel Dodds. “Because it isn’t Brexit for the whole of the United Kingdom.”

To make up for the votes of 10 DUP lawmakers, Johnson has tried to persuade members of the left-of-center Labour Party to support the deal. Late Friday the government promised to bolster protections for the environment and workers’ rights, to allay Labour fears that the Conservative government plans to slash those protections after Brexit.

Senior figures in the party were unimpressed.

“This empty gesture is not worth the paper it’s written on,” said Labour employment spokeswoman Laura Pidcock.

Alexei Leonov, the first human to walk in space, dies in Moscow

Alexei Leonov, the legendary Soviet cosmonaut who became the first human to walk in space 54 years ago and who nearly didn’t make it back into his space capsule, has died in Moscow at 85. The Russian space agency Roscosmos made the announcement on its website on Friday but gave no cause for his death. […]

No ‘double standards’ in dealing with protesters: Hong Kong police

Hong Kong police on Monday denied accusations their officers showed comparative lenience towards gangs of pro-Beijing men who attacked pro-democracy supporters during a weekend marked by multiple bloody street brawls. The once stable international hub has been convulsed by weeks of huge, sometimes violent rallies calling for greater democratic freedoms and police accountability. On Sunday, […]

India is, once again, not included in an expanded list of countries from where students applying for visas will be subject to less stringent documentation requirements, details provided on Thursday showed. This follows last year’s controversy when China, Indonesia, the Maldives and other countries were included on the list. The failure to include India triggered […]