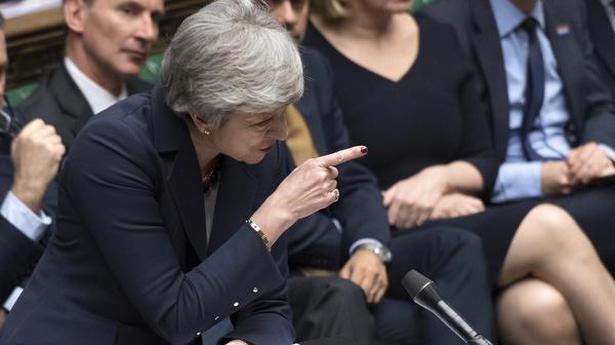 The British government is set to make a last-ditch attempt to avoid a longer delay to Brexit or crashing out of the EU, by putting part of its controversial withdrawal deal to MPs in a vote on Friday. While the Speaker of the House of Commons has allowed the motion to be put to MPs on Friday, it remains uncertain whether Prime Minister Theresa May will command enough support.

Ms. May’s pledge earlier this week to make way for a successor in time for the next phase of Brexit negotiations does not appear to have persuaded enough MPs to back her deal, while Labour has warned that the motion being proposed would amount the “blindest of blind Brexits”, and has made it clear that it will oppose the motion.

This is because the motion being put to MPs only involves part of the total withdrawal deal. MPs will vote on the withdrawal treaty itself — the formal legal document that covers how the U.K. will exit the EU — but not on the accompanying political declaration on future relations.

Deadline for one part

They are able to divide the motion in this way because the EU’s offer of a delay till May 22 only requires the withdrawal agreement to be approved this week.

While Labour’s objections have largely centred on the political declaration, the party remains concerned that a lack of clarity on future relations could mean that hard-Brexiteers take control of the process. Their concerns are exacerbated by the prospect of a hard-line Brexiteer — such as Boris Johnson — replacing Ms. May in the next phase of negotiations.

Uncertainty has continued to pervade the Brexit process as MPs failed to back any of the eight alternative options in a vote held on Wednesday night. This, combined with the uncertainty over the withdrawal deal, leaves Britain in a highly uncertain position, with no route ahead appearing to command support within Parliament.

Wednesday was a seismic day in British politics as Ms. May played what had been seen as her trump card before backbench Conservative MPs. “I know there is a desire for a new approach — and new leadership — in the second phase of the Brexit negotiations, and I won’t stand in the way of that,” she told MPs of the Conservatives backbench 1922 committee on Wednesday afternoon.

The implication was that were her deal to pass and Britain leave the EU on May 22, she would resign soon after that.

While it did indeed impact some — such as Mr. Johnson who said he would now back the deal if someone else could lead the negotiations on the future relationship — others within the party remained firm.

Influential Brexiteer Jacob Rees-Mogg, after initially hinting he could back her, pulled back on this after the Democratic Unionist Party of Northern Ireland was adamant that it wasn’t for turning. It indicated that it is not even willing to abstain but will vote against the deal.

“Given the fact that the necessary changes we seek to the backstop have not been secured between the government and the European Union, and the remaining and ongoing strategic risk that Northern Ireland would be trapped in backstop arrangements at the end of the implementation period, we will not be supporting the government if they table a fresh meaningful vote,” the DUP said.

However, Ms. May’s hand has been somewhat strengthened by the failure of Parliament to identify a route ahead. In historic proceedings, MPs seized control of the parliamentary timetable on Wednesday to debate and vote on a series of options, ranging from a no-deal exit, customs union membership, a confirmatory public vote on any deal, and an upgraded version of Norway’s rela tionship with the EU. However, in all cases the ‘Nos’ outnumbered the “Yeses”.

With not all MPs voting on these options (there are 650 MPs in the Commons in total) there are hopes that a second round on Monday could result in greater clarity, if MPs were faced with a shorter list of options.

Still, it is far from guaranteed that any option will command a clear majority, and with the two Brexit deadlines fast approaching (May 22 if Ms. May’s deal is accepted and April 12 to come up with alternative options if it is not), a longer extension and a general election are seen as increasingly likely outcomes.

Argentina’s Treasury Minister Nicolas Dujovne has resigned, saying in a letter seen by Reuters on Saturday he believed the government needed significant renewal in its economic team amid a crisis which saw the peso plunge this week. Dujovne said in a letter to Argentine President Mauricio Macri that he had given his all to the […]

The United States Department of State has approved the sale of 24 MH-60R multi-mission helicopters to India under its Foreign Military Sales (FMS) program. The value of the potential is $2.6 billion, as per a statement released on Tuesday by the Defense Security Cooperation Agency (DSCA), the body that administers the FMS program. The principal […]