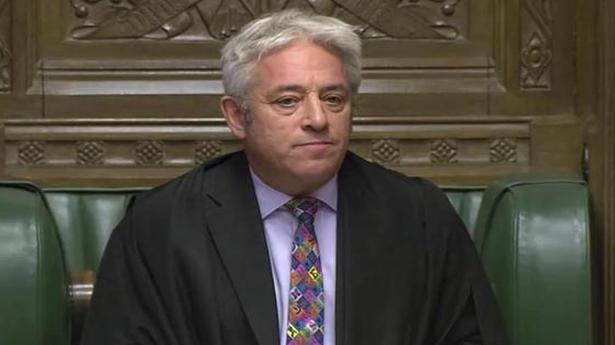 Prime Minister Boris Johnson’s faces a potentially perilous ratification of his Brexit divorce deal in the British Parliament after the Speaker refused to allow a vote on it on Monday.

With just 10 days left until the United Kingdom is due to leave the EU on October 31, the divorce is again in disarray as Britain’s political class argue over whether to leave with a deal, exit without a deal or hold another referendum.

House of Commons Speaker John Bercow said a vote should not be allowed on Monday as the same issue had been discussed on Saturday when opponents turned Mr. Johnson’s big Brexit day into a humiliation.

“My ruling is therefore that the motion will not be debated today as it would be repetitive and disorderly to do so.”

Although Mr. Johnson hammered out a deal in gruelling talks with EU officials last week, it was not certain that the Speaker of the House of Commons would allow a vote on the deal on Monday.

Mr. Johnson was ambushed by opponents in Parliament on Saturday who demanded a change to the sequencing of the ratification of the deal, exposing the Prime Minister to a law which demanded he request a delay until January 31.

In a twist that illustrates the extent to which Brexit has strained the norms of British statecraft, Mr. Johnson sent the note to the EU unsigned — and added another signed letter arguing against what he cast as a deeply corrosive delay.

“A further extension would damage the interests of the UK and our EU partners, and the relationship between us,” Mr. Johnson said his own letter, signed “Boris Johnson”.

The EU has not yet given a clear response.

The government insisted on Sunday the country will leave the EU on October 31, and plans to put the deal to a vote in parliament later on Monday though it is unclear if the House of Commons speaker, John Bercow, will allow such a vote.

If Mr. Bercow, who said on Saturday he was blindsided by the government’s debate proposal, does not allow it then the government will have to try to push on with the legislation needed for ratification of Mr. Johnson’s deal.

But that is a path that exposes Johnson to attempts by opponents to wreck the agreement.

Goldman Sachs raised the probability of the United Kingdom leaving with a ratified deal to 70% from 65%, cut its view of the chances of a “no-deal” Brexit to 5% from 10% and left its view on no Brexit at all unchanged at 25%.

The EU, which has grappled with the tortuous Brexit crisis since Britons voted 52%-48% to leave in a 2016 referendum, decided on Sunday to play for time rather than rush to decide on Johnson’s request.

From the EU’s point of view, extension options range from just an additional month until the end of November to half a year or longer.

Anti-Brexit campaigners said they would ask a Scottish court on Monday to delay its ruling on a legal challenge that sought to force Johnson to comply with a law requiring him to request a delay to Brexit in the event that no agreement had been approved.

EU Council President Donald Tusk has said he has received Johnson’s unsigned request and is consulting with EU leaders on how to react.

In London, Johnson’s ministers said they were confident they had the numbers to push a deal through parliament where opponents were plotting to derail the deal he had assured the EU that he could ratify.

But the opposition Labour Party is planning changes to the legislation needed for Brexit that would make the deal unacceptable to swathes of Johnson’s own party including a proposals for another referendum.

Johnson’s former allies, the Northern Irish Democratic Unionist Party (DUP), said they would not back a proposal for a customs union with the EU – a step that, if passed, would doom Johnson’s deal.

“We are clear where we stand on the customs union as something that we cannot support and will not support, and I believe that that will be the stance we will have later on when we see the wording,” DUP lawmaker Jim Shannon said.

If Johnson’s deal is scuppered just days before the United Kingdom’s planned departure, it would leave Johnson a choice: try to leave without a deal or accept a delay.

Flags touting independence flapped above the dusty streets of Bougainville Friday on the eve of a landmark referendum, as once rebel fighters voiced excitement they may achieve at the ballot box what they could not on the battlefield. “I fired many bullets to protect my beloved Bougainville,” said former rebel strongman Chris Uma as he […]

Under the new rules, House lawmakers will no longer be required to travel to Washington to participate in floor votes. Source: thehindu.com Related

A film that stirred up a hornet’s nest

A film that portrays surfing as a symbolic way of women’s empowerment in Bangladesh has stirred up mixed reactions for its unusual theme. No Dorai that translates as “Not Afraid” delves into an obscure community in the small beach town of Cox’s Bazar — a community that does not let women venture out to sea […]