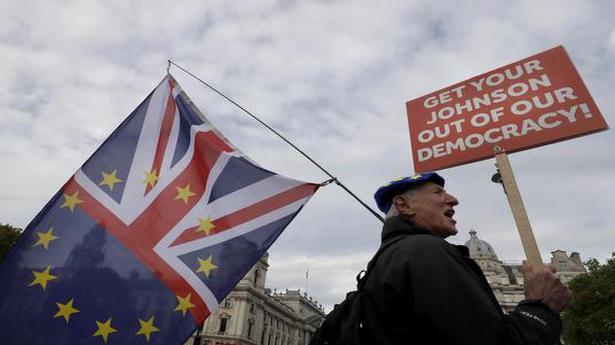 The U.K.’s Royal Mint plans to melt down and recycle the commemorative coins minted to mark Brexit on October 31, after the U.K.’s exit from the European Union (EU) was delayed by three months until January 31, 2020.

The concept of a new 50-pence coin, featuring the U.K.’s scheduled departure date from the economic bloc, will now be moved to a later date.

“We will still produce a coin to mark our departure from the European Union, and this will enter circulation after we have left,” a U.K. Treasury spokesperson said.

The dates on the coin has been reworked from the original March 29, 2019 Brexit deadline but the text — Peace, prosperity and friendship with all nations — has remained constant.

The phrase echoes that of third U.S. President, Thomas Jefferson, in his inaugural address – in which he vowed “peace, commerce, and honest friendship with all nations” with the caveat “entangling alliances with none”.

The design, featuring the U.K. monarch’s head and a standard inscription on one side with the special message and date on the other, was approved at a meeting of the U.K.’s Privy Council on October 8.

British Prime Minister Boris Johnson took charge at 10 Downing Street in July with a vow to leave the EU by October 31 with or without a deal, “no if or buts”.

But, he was forced by law to send a letter seeking an extension from the EU with no deal in place by mid-October, which was accepted by the remaining 27 EU members, setting the new January 2020 deadline for Brexit.

Pakistan must prevent militant groups from operating on its soil and prosecute top Lashkar-e-Taiba operatives along with its leader Hafiz Saeed, the United States has said ahead of the Financial Action Task Force’s crucial decision on whether to blacklist the country. Alice Wells, head of the U.S. State department’s South and Central Asian bureau, also […]

Analysis | The importance of Qasem Soleimani

Major General Qasem Soleimani , the commander of Iran’s Quds Force who was killed in a U.S. air strike in Baghdad on Friday, had an illustrious career as a spymaster and military strategist and a celebratory status in Iran. Always a defender of the Islamic revolution, Soleimani reported directly to Supreme Leader Ayatollah Ali Khamenei […]