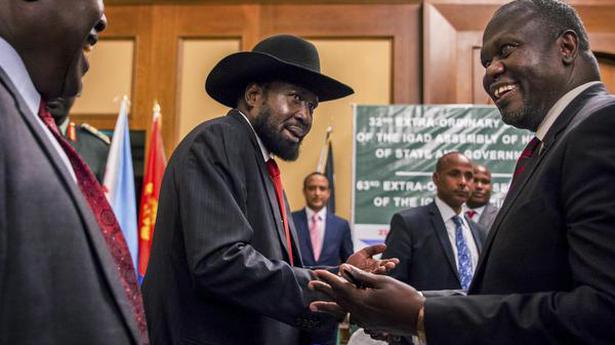 The panel of experts said it was told by senior leaders of Mr. Machar’s Sudan People’s Liberation Movement in Opposition that the first Vice-President has been de facto under house arrest, and that Mr. Kiir’s faction has monopolised government policies, giving Opposition Ministers ceremonial roles and also excluding them from decision-making.

While government officials have attributed the stagnation of the peace agreement to the spread of COVID-19, multiple sources within the government, including Ministers and aides close to the President, told the panel that the lack of implementation is a consequence of political disagreements, the experts’ said in the 56-page report circulated on December 2.

There were high hopes that South Sudan would have peace and stability after gaining its long-fought independence from neighbouring Sudan in 2011. But the world’s youngest nation slid into ethnic violence in December 2013, when forces loyal to Mr. Kiir, a Dinka, started battling those loyal to Mr. Machar, his former Vice-President who belongs to the Nuer people.

Numerous attempts at peace failed, including a deal that saw Mr. Machar return as Vice-President in 2016 — only to flee the country months later amid fresh fighting. The civil war has killed nearly 4,00,000 people and displaced millions.

Intense international pressure followed the most recent peace deal in 2018, and on February 22 a coalition government led by Mr. Kiir, with Mr. Machar as his deputy, was formed. But peace still remains elusive, as the report to the U.N. Security Council by the panel monitoring sanctions against South Sudan clearly shows.

According to the experts, forces backed by Mr. Kiir and Mr. Machar have violated the latest cease-fire agreement. They said the formation, training and redeployment of unified forces called for in the peace agreement has not progressed.

And they warned that inaction on peace has led the chains of command in armed groups to fracture, with some units prepared to return to conflict and some of Mr. Machar’s commanders defecting with their soldiers to the government side.

Political and security disputes within Mr. Kiir’s coalition have also contributed to conflicts that have killed and displaced civilians in the eastern Jonglei and Greater Pibor administrative area, the panel said.

It said the political momentum, supported by regional mediation, that led to Mr. Machar’s return has eroded and is needed now to spur implementation of the coalition agreement.

This is important, the panel said, because of three emerging security risks — the weak chain of command in Kiir’s and especially Machar’s forces which poses significant threats for civilians, an offensive in Central and Western Equatoria by South Sudan’s Army, and government efforts to acquire new weapons and military training.

The panel said one of Mr. Kiir’s generals, who travelled to Uganda and Kenya in an attempt to resupply weapons and ammunition, has recruited a new force of around 500 men who reportedly received passports in October in order to travel to a regional country for training.

Resupplying weapons and ammunition to government security forces or armed groups when the peace agreement isn’t being implemented would further threaten civilians and risk the peace and security of South Sudan, the experts said.

The panel recommended that the Security Council continue the arms embargo against South Sudan and take measures to improve its implementation.

It said tangible steps to implement the peace agreement have often required consistent pressure from IGAD, the regional bloc that mediated South Sudan’s peace process, and the main guarantors of the peace agreement, Sudan and Uganda.

But since the government was formed in February, the panel said, the lack of unity within IGAD has limited the needed high-level engagement and Ugandan forces have continued to enter South Sudan, clashing in Eastern Equatoria with government forces in violation of the arms embargo.

It urged the region to focus on implementing the peace agreement.

Russian scientists tracking migrating eagles were forced to start a crowdfunding campaign after their birds wandered into Iran and foreign text messages from their tracking devices depleted the project’s budget. Scientists rang the alarm earlier this month when several endangered steppe eagles transmitting coordinates via Russian mobile numbers wandered into the roaming zone after spending […]

A Sri Lankan court released the country’s police chief on bail on Tuesday, hours after he was arrested for allegedly threatening a worker at police headquarters two years ago. Pujith Jayasundara has been under suspension for alleged negligence leading to suicide bomb attacks on Easter Sunday that killed more than 260 people. Jayasundara is facing […]