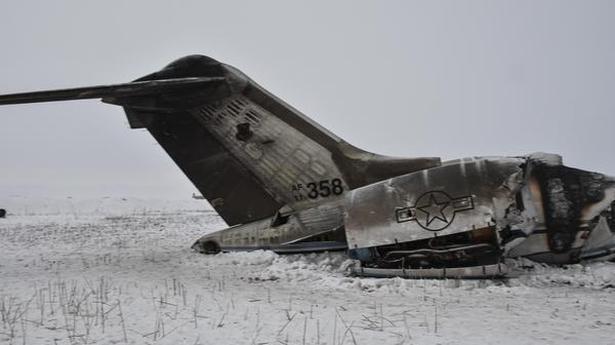 The American surveillance plane that crashed in Afghanistan’s Ghazni province on Monday may have killed Michael D’Andreas, CIA’s head for Iran, Iranian media has reported.

It said the Afghan Taliban was in possession of ‘documents’ apparently recovered from the wreckage of the plane. On Monday, the Taliban claimed that the U.S. aircraft had been “brought down” in the Ghazni province, but did not appear to take direct responsibility for the alleged attack.

“The plane, which was on an intelligence mission, was brought down in Sado Khel area of Deh Yak district of Ghazni province,” said Taliban spokesman Zabiullah Mujahid in a statement.

Analysts point out that in case it could be established that the plane was shot down by the Taliban, it could ruin prospects of a revived dialogue between the U.S. and the militant group, essential for the withdrawal of the U.S. forces from Afghanistan — a key campaign issue for U.S. President Donald Trump’s seeking his second term in office.

Unsurprisingly, U.S. military spokesman Colonel Sonny Leggett said in a statement, “While the cause of crash is under investigation, there are no indications the crash was caused by enemy fire.”

The IFP news website obliquely linked the crash with the assassination of Iranian Commander Qasem Soleimani in a drone strike outside Baghdad airport on January 3. Mr. Andreas “who was responsible for the assassination of Iran’s top commander Lieutenant General Qasem Soleimani, was apparently among the officers on board the plane,” it said quoting the Veterans Today website of Russia.

The Iran’s Press TV quoted remarks by Hossein Salami, chief commander of the Islamic Revolution Guards Corps (IRGC), that “none of American military commanders would be safe in any part of the world, if the U.S. administration continues to threaten the Iranian commanders”.

Addressing a meeting of the Basij paramilitary commanders on Monday in reaction to recent comments by a U.S. official of a possible follow-up assassination of Gen. Soleimani’s successor, Major General Hossein Salami said: “I mean, if they threaten our commanders with [an act of] terror or implement their threat, the lives of none of their commanders would be safe.”

The Press TV website quoted an interview with the Saudi-owned newspaper Asharq al-Awsat on the sidelines of the World Economic Forum (WEF) in Davos with U.S. special representative for Iran Brian Hook who apparently said Washington will assassinate Gen. Soleimani’s successor Esmail Qaani if the Islamic republic persisted with following “the same path of killing Americans …”

Last Sunday, Carlos da Silva, a 39-year-old homeless man, was sleeping on a pad of flattened cardboard boxes at a footpath in the city’s eastern quarters, when a man tip-toed on him and doused the ground with a liquid before throwing a burning match-stick into it. As the flammable liquid exploded, the man ran away […]

An Indian-origin woman in the U.S. has been sentenced to 22 years to life in prison for strangling her nine-year-old stepdaughter to death in a bathtub in August 2016, a crime described as “unimaginable” by the court. Shamdai Arjun, 55, of Queens, New York, was convicted last month of second-degree murder by a jury that […]

An American military official says that the U.S., Australia, India and Japan continue to have regular diplomatic meetings to “coordinate our respective visions of and efforts in the Indo-Pacific region.” Pentagon spokesman Lt. Col Dave Eastburn made the comments late Friday in Washington to clarify that the U.S.-backed diplomatic grouping often referred to as the […]