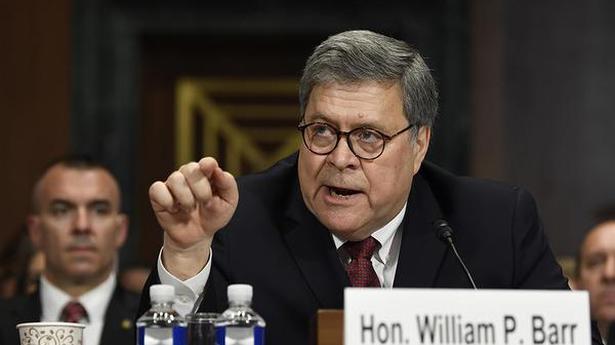 U.S. Attorney General Bill Barr did not appear before the House of Representatives Judiciary Committee for a hearing that was scheduled for 9 a.m. on Thursday morning. Mr. Barr had already announced his decision to stay away from the hearing on Wednesday, a day when he was grilled for five hours by the Senate Judiciary Committee. The House could now hold Mr. Barr in contempt.

Congressional Democrats are probing whether a four-page letter Mr. Barr sent lawmakers on March 24, days after he had received the Mueller report, misrepresented Special Counsel Robert Mueller’s findings on whether U.S. President Donald Trump obstructed the investigation into whether Russia meddled in the 2016 presidential elections.

Mr. Barr was not amenable to the format of the House hearing on Thursday, specifically the Democrats’ desire to use legal counsel (in addition to Representatives) to question him.

The Attorney-General’s chair remained conspicuously empty at the House hearing which started at 9 a.m. as planned and adjourned shortly after opening remarks were made by House Judiciary Committee Jerrold Nadler.

During Wednesday’s Senate hearing, Mr. Barr frequently defended the President’s conduct and attempted to mitigate concerns raised by the Mueller report. He was questioned on the Mueller investigation’s revelations that Mr. Trump had called former White House Counsel Don McGahn twice in June 2017 to get Mr. McGahn to interfere in the investigation.

As per the Mueller report, Mr. McGahn recalled the President saying, “Mueller has to go,” and “Call me back when you do it.”

Mr. McGahn had said he had planned to resign rather than comply with the President’s requests. Mr. Barr said that the President was just trying to get Mr. McGahn to bring up a conflict of interest issue in the Mueller probe with Deputy-Attorney General Rod Rosenstein, who was overseeing the investigation.

Mr. Trump had also asked Mr. McGahn to write a letter denying the incident. Mr. Barr said it could be that Mr. Trump wanted to correct media accounts of what had transpired.

Mr. Barr also told the Senate during the hearing that the President had the authority to fire Mr. Mueller and that made it difficult to prove that obstruction of justice had occurred. “In this kind of situation, where you have a facially innocent act that’s authorised by the Constitution, it’s hard to establish beyond a reasonable doubt that it’s corrupt,” he said.

The Mueller report did not conclude that Mr. Trump obstructed justice but at the same time it did not exonerate him, as the President has claimed it did. In fact, the report reads, “If we had confidence after a thorough investigation of the facts that the President clearly did not commit obstruction of justice, we would so state.”

Mr. Barr called “a bit snitty” a letter Mr. Mueller had written to him in late March complaining that the latter’s four-pager “did not fully capture the context, nature, and substance” of the Mueller probe. The letter was made public the day before the Senate hearing. Mr. Barr also suggested that the letter had been written by one of Mr Mueller’s staffers. Democrats have accused Mr. Barr — whose job it is to be the nation’s lawyer — of acting as Mr. Trump’s personal counsel. Senate Republicans questioned the motivation behind the investigation and hearings. Josh Hawley, a Montana Republican, said unelected officials had tried to overturn the results of the 2016 presidential election. Senate Judiciary Committee Chairman Lindsay Graham, a South Carolina Republican and Trump ally, chose to open Wednesday’s hearing by focussing on Hilary Clinton’s use of a personal server for her official emails when she was Secretary of State.

The next phase of the Bill Barr post-Mueller saga is expected to unfold in the House, where Mr. Nadler said he would give Mr. Barr another day or two to hand over the full Mueller report along with its underlying evidence to his committee, failing which he would seek a contempt citation against the Attorney-General (Eric Holder, Barack Obama’s Attorney-General received one from the Republican controlled House in 2012).

Some Democrats have called on Mr. Barr to resign, and others want to start impeachment proceedings.

(With inputs from The New York Times)

Three Indian nationals seeking asylum in the US have been forced to receive IV drips at a US Immigration and Customs Enforcement facility in Texas as they approach their third week of a hunger strike, according to their attorney. Lawyers and activists who spoke with the men fear that force-feeding may be next. The US […]

Austrians vote with conservatives in lead

Austrians began voting Sunday in snap elections, in which the conservatives look set to triumph but face difficulties finding a partner to govern after a corruption scandal brought down their last coalition with the far-right. The People’s Party (OeVP) led by 33-year-old Sebastian Kurz is predicted to win around 33%, up slightly from the last […]

Nepal is preparing to bring back its 180 nationals struck in China’s Wuhan city, the epicentre of the deadly coronavirus that has killed over 1,000 people, officials said here. The disease emerged in December in a market in central China’s Wuhan city that sold wild animals, and spread rapidly. Outside China, there have been more […]