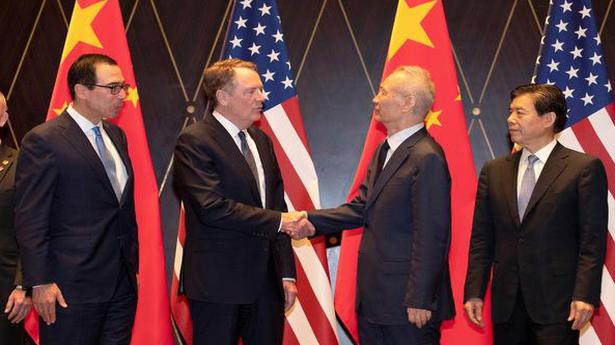 U.S. and Chinese negotiators agreed to meet again in the United States in September after holding “frank” and “constructive” talks in Shanghai on Wednesday, State media said following meetings overshadowed by a Twitter tirade from President Donald Trump.

“The two sides conducted frank, highly efficient and constructive in-depth exchanges on major issues of common interest in the economic and trade field,” according to the official Xinhua news agency, adding that the purchase of U.S. agricultural goods by China was discussed.

Washington and Beijing have so far hit each other with punitive tariffs covering more than $360 billion in two-way trade in a row centred on demands for China to curb the alleged theft of American technology and provide a level playing field to U.S. companies.

The negotiators shook hands and exchanged pleasantries when they met Wednesday morning and then held talks for around four hours behind closed doors.

The talks were relatively brief and the negotiators emerged later, a little earlier than expected, for a group photo before the US trade officials left for the airport without speaking to reporters.

Talks had broken down in May after Mr. Trump accused China of reneging on its commitments, but the US leader and President Xi Jinping agreed to a truce in June.

Lighthizer and Mnuchin had arrived Tuesday and joined Chinese officials for dinner and informal discussions — just as Mr. Trump lambasted the Chinese side on Twitter, saying “they always change the deal in the end to their benefit”.

The US leader said Beijing was supposed to start buying US agricultural products but they had shown “no signs that they are doing so”.

Xinhua said that the negotiators discussed “the issue of China increasing its purchases of U.S. agricultural products according to its domestic needs” and the U.S. creating “favourable conditions for these purchases”.

Commerce Minister Zhong Shan, who is considered a tough negotiator and who has taken a more prominent role in the talks, was among the Chinese officials at the meeting.

“The two sides will hold the next economic and trade consultations in the United States in September,” the news agency added.

Pakistan could be blacklisted by FATF due to ‘lobbying by India’, says Qureshi

Pakistan could be blacklisted by the Financial Action Task Force (FATF) due to “lobbying by India”, Foreign Minister Shah Mahmood Qureshi said as he estimated that the country could suffer $10 billion loss annually if it remains in the watchdog’s grey list. In June last year, the Paris-based FATF had placed Pakistan on the ‘grey […]

The World Bank is offering technical assistance to China to help battle the coronavirus epidemic but no new loans, the development lender’s president, David Malpass, said on Monday. Malpass told Reuters the bank was working with the World Health Organization (WHO) to aid China, including offering advice about past health crises, but did not plan […]