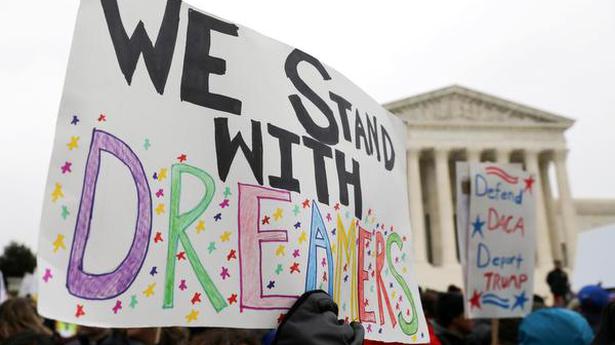 The Trump administration tried ending the Deferred Action for Childhood Arrivals (DACA) in 2017, but the U.S. Supreme Court blocked its attempt in June.

Reversing the decision of the outgoing Trump administration, a federal court has ordered full reinstatement of an Obama-era programme that protects undocumented immigrants brought to the U.S. as minors from deportation, a ruling that will help a large number of Indian migrants.

The Trump administration tried ending the Deferred Action for Childhood Arrivals (DACA) in 2017, but the U.S. Supreme Court blocked its attempt in June.

This means that the first time since September 2017, new applicants who were not previously eligible may now apply for the programme which shield undocumented immigrants who came to the U.S. as children from deportation.

The court believes that these additional remedies are reasonable. Indeed, the government has assured the court that a public notice along the lines described is forthcoming, Judge Garaufis said in his order.

The DACA is an immigration policy that allows some individuals with unlawful presence in the U.S. after being brought to the country as children to receive a renewable two-year period of deferred action from deportation and become eligible for a work permit in the U.S.. DACA recipients are often referred to as Dreamers. To be eligible for the programme, recipients cannot have felonies or serious misdemeanours on their records.

Approximately 6,40,000 immigrants are enrolled in the DACA programme.

The Trump administration can now appeal to a federal appeals court or go to the Supreme Court for temporary relief from enforcement of the judge’s order.

House Speaker Nancy Pelosi said the court has upheld the Obama-era programme initiated under the presidency of Barack Obama, which respects American values and the will of the American people.

“Dreamers need and deserve real, permanent action to ensure that they can continue to contribute to our nation. In the 117th Congress, our Democratic House Majority will once again pass bipartisan legislation to protect Dreamers, which will be signed into law by the Biden-Harris Administration,” she said.

“In his final days in office, President Trump must end his ugly and inhumane assault on the young immigrant communities who bless and strengthen our country and obey this ruling immediately,” Ms. Pelosi said.

House Majority Leader Steny H Hoyer described it as a victory for Dreamers, their families, and communities they contribute their talents to across the country.

“However, I continue to believe we must solve the DACA crisis created by President Trump by enacting legislation to provide Dreamers with certainty they can remain here and pursue a pathway to citizenship,” he said.

Mr. Hoyer said that House Democrats passed the American Dream and Promise Act nearly 18 months ago, and it has languished in the Republican-led Senate, notwithstanding the fact that a strong, bipartisan majority of Americans are demanding action, he said.

He urged the Trump Administration to accept first-time applications consistent with this decision.

The Judge ruled that the DACA 2012 memo is the law of the land, and that three days from now, on Monday, DHS must be prepared to implement this — including accepting and processing new DACA applicants.

Thousands of young people who should have been eligible for deportation protection and work authorisation have been waiting for over three years to access this life-changing programme and live with peace of mind in the country they call home.

It is well past time for DHS to finally follow the repeated judicial orders and begin to accept these applications, Mr. Schulte said.

More than three years ago, the Trump administration attempted its fatal blow to the DACA programme, but immigrant youth and the movement fought back and won. After Mr. Trump lost at the Supreme Court, the administration in July tried once again to attack DACA — limiting renewals to just one year and blocking overdue relief to DACA-eligible immigrant youth. “Tonight, we celebrate another victory. Dreamers, and DACA, are here to stay,” said Madhuri Grewal, federal immigration policy counsel for the American Civil Liberties Union.

Ms. Grewal demanded that U.S. President-elect Joe Biden must fulfill his commitment to introduce an immigration bill on day one to pursue permanent relief for immigrant communities.

Simultaneously, the Biden administration can and must provide immediate relief to immigrant youth and their communities. After four years of relentless attacks by the current administration and decades of uncertainty, people deserve to live without fear, she said.

Pakistan in the grip of a crippling problem

Nigeria marked three years since its last case of polio last month — an important step towards being declared free of the crippling disease. The two other polio-endemic nations — Pakistan and Afghanistan — have, however, not shown much progress. Polio cases in Pakistan have rather increased in recent years. Recently, Prime Minister Imran Khan […]

Morning Digest: Divergences remain between India and China despite 5-point plan, eight students from Telangana among 24 toppers of JEE Mains, and more

Russell Kirsch, inventor of pixel, passes away at 91

Pixels weren’t an obvious innovation in 1957, when Russell Kirsch created a small, 2-by-2-inch black-and-white digital image of his son, Walden, as an infant. Source: thehindu.com Related