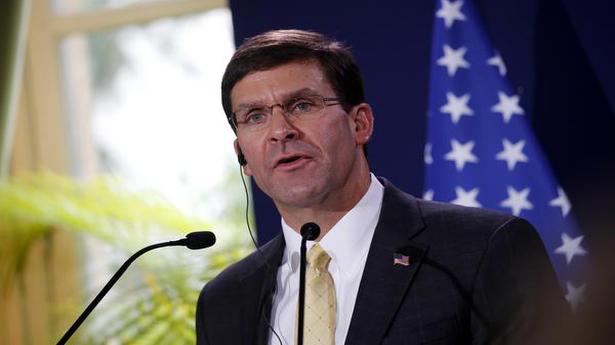 Mark Esper sought a firsthand assessment Sunday of the U.S. military’s future role in America’s longest war as he made his initial visit to Afghanistan as Pentagon chief. Stalled peace talks with the Taliban and unrelenting attacks by the insurgent group and Islamic State militants have complicated the Trump administration’s pledge to withdraw more than 5,000 American troops.

Mr. Esper told reporters traveling with him that he believes the U.S. can reduce its force in Afghanistan to 8,600 without hurting the counterterrorism fight against al-Qaida and the Islamic State group. But he said any withdrawal would happen as part of a peace agreement with the Taliban.

The U.S. has about 14,000 American troops in Afghanistan as part of the American-led coalition. U.S. forces are training and advising Afghan forces and conducting counterterrorism operations against extremists. President Donald Trump had ordered a troop withdrawal in conjunction with the peace talks that would have left about 8,600 American forces in the country.

U.S. envoy Zalmay Khalilzad had a preliminary peace deal with the Taliban, but a surge in Taliban violence and the death of an American soldier last month prompted Mr. Trump to cancel a secret Camp David meeting where the peace deal would have been finalized. He declared the tentative agreement dead.

“The aim is to still get a peace agreement at some point, that’s the best way forward,” said Mr. Esper. He visited Afghanistan in his previous job as U.S. Army secretary.

A month after the peace agreement collapsed, Mr. Khalilzad met with Taliban in early October in Islamabad, Pakistan, but it was not clear what progress, if any, was being made.

Both Mr. Ghani and his current partner in the unity government, Chief Executive Abdullah Abdullah, have said they believe they had enough votes to win. The Sept. 28 vote was marred by widespread misconduct and accusations of fraud.

Mr. Esper planned to meet with his top commanders in Afghanistan as the U.S. works to determine the way ahead in the 18-year war.

Mr. Trump, since his 2016 presidential campaign, has spoken of a need to withdraw U.S. troops from the “endless war” in Afghanistan. He has complained that the U.S. has been serving as policemen in Afghanistan, and says that’s not the American military’s job.

The United States has officially shuttered its consulate in Jerusalem, downgrading the status of its main diplomatic mission to the Palestinians by folding it into the U.S. Embassy to Israel. For decades, the consulate functioned as a de facto embassy to the Palestinians. Now, that outreach will be handled by a Palestinian affairs unit, under […]

Five people were killed on Thursday when a commuter aircraft crashed in rural southwestern Alaska, killing all aboard, officials said. The plane, a Piper PA32, crashed “under unknown circumstances,” Allen Kenitzer, a spokesman for the Federal Aviation Administration, said in an email. The crash happened near the Yup’ik village of Tuntutuliak, a community about 430 […]

A tectonic shift in America’s relations with China under Donald Trump’s presidency — one that Indian officials believe is here to stay and will outlast the current U.S. President — is providing a new impetus to defence, security, trade and technological cooperation between New Delhi and Washington in the region. The U.S.-China trade and technology […]