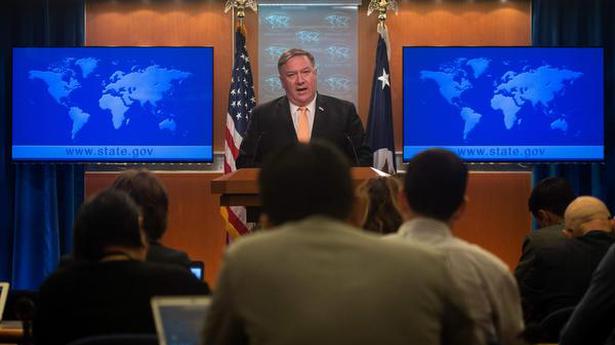 The U.S. will not renew exemptions from its sanctions for importing oil from Iran, U.S. Secretary of State Mike Pompeo announced on Monday.

The exemptions were granted last November for a 180-day period for India and seven other countries, and are due to expire on May 2.

“Today we are announcing the United States will not issue any additional Significant Reduction Exceptions [SREs] to existing importers of Iranian oil. The Trump Administration has taken Iran’s oil exports to historic lows, and we are dramatically accelerating our pressure campaign in a calibrated way that meets our national security objectives while maintaining well supplied global oil markets,” Mr. Pompeo said via a statement released on Monday.

“We will continue to apply maximum pressure on the Iranian regime until its leaders change their destructive behaviour, respect the rights of the Iranian people, and return to the negotiating table.”

India, China and U.S. allies Japan, South Korea and Turkey will be the most impacted by the non-renewal of waivers. The other three currently exempted countries — Italy, Greece and Taiwan — have already reduced their imports to zero.

Nations warned against trade with Iran

“Any nation or entity interacting with Iran should do its diligence and err on the side of caution. The risks are simply not going to be worth the benefits,” Mr Pompeo said.

Earlier in April, India’s Ministry of External Affairs (MEA), had said that India and the U.S. were “ continually engaged” on the issue of India’s oil imports from Iran since sanctions kicked in last November The Hindu had reported. U.S. Under Secretary for Terrorism and Financial Intelligence Sigal Mandelkar, had visited New Delhi in early April to discuss the issue.

That an announcement of this nature was imminent, was first reported by the Washington Post on Sunday. The price of global benchmark brent crude hit a six month intraday high on Monday.

Oil exports from Iran hit a low of 1.0 to 1.0 million bpd in March this year – down from 2.5 million bpd in April 2018. The U.S. announced that it would withdraw from the Joint Comprehensive Plan of Action (JCPOA) or “ Iran deal” in May.

The U.S. has tried to allay fears that oil markets will be impacted following the decision to stop exemptions. Organization of the Petroleum Exporting Countries (OPEC), the global oil cartel led by Saudi Arabia, has been coordinating with Russia to cut oil supply since January.

“Saudi Arabia and others in OPEC will more than make up the Oil Flow difference in our now Full Sanctions on Iranian Oil,” US President Donald Trump tweeted on Monday.

“We have had extensive and productive discussions with Saudi Arabia, the United Arab Emirates, and other major producers to ease this transition and ensure sufficient supply. This, in addition to increasing U.S. production, underscores our confidence that energy markets will remain well supplied,” Mr Pompeo’s statement said.

The sanctions have provided the U.S. an opportunity to put more of its own crude on the market. U.S. crude production was 1.6 million bpd higher than it was in 2017, and an additional 1.5 million bpd is expected in 2019, according to Mr Pompeo.

The White House and State Department have worked closely on the sanctions waiver issue and the White House issued its on statement on Monday.

“ The President’s decision to eliminate all SREs follows the designation of the Islamic Revolutionary Guard Corps as a Foreign Terrorist Organization, demonstrating the United States commitment to disrupting Iran’s terror network and changing the regime’s malign behavior. We welcome the support of our friends and allies for this effort,” the White House Press Secretary Sarah Sanders said via a statement.

The Minister is on paternity leave

Even as the U.S. and Iran moved closer to war, bushfires ravaged Australia, ‘Megxit’ unfolded and Brexit loomed, Japan’s January headlines were dominated by a Cabinet Minister taking a couple of weeks of paternity leave. Shinjiro Koizumi, the Environment Minister, has just become father to a baby boy. What’s causing all the fuss is his […]

In a historic first, a gay African American woman was elected mayor of America’s third largest city on Tuesday, as Chicago voters entrusted a political novice with tackling difficult problems of economic inequality and gun violence. Lori Lightfoot, a 56-year-old former federal prosecutor and practicing lawyer who has never before held elected office, was elected […]