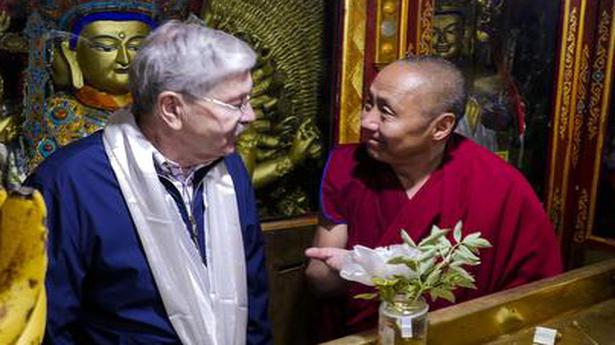 The U.S. Ambassador to China has called on Beijing to open a “substantive dialogue” with the Dalai Lama in remarks made this week during a visit to Tibet, his Embassy said on Saturday.

“He encouraged the Chinese government to engage in substantive dialogue with the Dalai Lama or his representatives, without preconditions, to seek a settlement that resolves differences,” said an Embassy spokesperson.

China is accused by human rights groups of repressing Tibet’s religion and culture, and cracking down on separatism.

Beijing says it protects religious freedom and has invested heavily to modernise the region and raise living standards.

Since fleeing to India in 1959, the Dalai Lama has been trying to reach a compromise with the Chinese government over the fate of his people. Having initially called for Tibet’s independence, the Buddhist leader is now campaigning for greater autonomy. But negotiations with Beijing have stalled since 2010.

Mr. Branstad, during his visit to Lhasa, visited the Potala Palace — the former residence of the Dalai Lama — as well as Tibetan Buddhism’s holiest temple, the Jokhang.

He met with senior Tibetan religious and cultural leaders.

“He also expressed concerns regarding the Chinese government’s interference in Tibetan Buddhists’ freedom to organise and practise their religion,” the Embassy spokesperson said. “The Ambassador raised our long-standing concerns about lack of consistent access to the Tibetan Autonomous Region,” she added.

In order to visit Tibet, foreigners require a special permit. For tourists it is usually relative easy to obtain, but for diplomats and in particular journalists it is more difficult.

Hong Kong protesters shot arrows and hurled petrol bombs from a barricaded university on Sunday at police who fired tear gas and water cannon in some of the worst violence in the Chinese-ruled city since anti-government unrest erupted five months ago. Several protesters took up positions on the rooftops of Hong Kong Polytechnic University, armed […]

A 24-year-old Hindu girl was allegedly abducted by armed assailants from her wedding ceremony in Pakistan’s Sindh province and forcibly converted to Islam before being married off to a Muslim man. The All Pakistan Hindu Council on Sunday said Bharti Bai was abducted last week from Hala town in Sindh province. She was then married […]

At least seven people have died and about 50 others have been injured in a massive fire that engulfed FR Tower in Dhaka’s Banani on Thursday (March 28). The fire broke out on the fifth floor of the multi-storey building at Kamal Ataturk Avenue around 12:45 pm, said an official of the Fire Service and […]