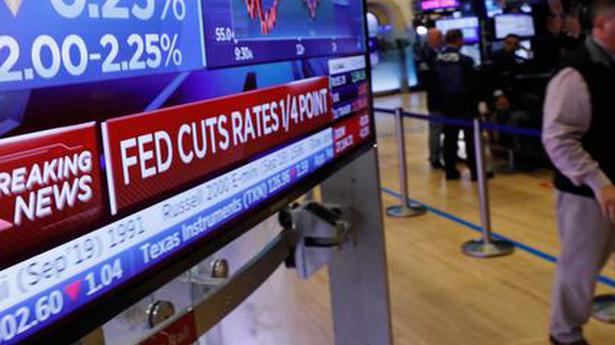 The U.S. Federal Reserve cut its key interest rate Wednesday for the first time in a decade to try to counter threats ranging from uncertainties caused by President Donald Trump’s trade wars to chronically low inflation and a dim global outlook.

Stocks tumbled soon after the Fed issued its statement at 2 p.m. Eastern time. The Dow Jones Industrial Average, which had been nearly flat before the announcement, sank about 300 points an hour later just as Chairman Jerome Powell was holding a news conference. Investors seemed disappointed that Powell said the Fed doesn’t envision a long series of rate cuts to follow Wednesday’s. But later in his news conference, he seemed to shift his message to leave open the possibility that the Fed would cut rates again. Stocks then pared their losses.

The central bank reduced its benchmark rate which affects many loans for households and businesses by a quarter-point to a range of 2% to 2.25%. It’s the first rate cut since December 2008 during the depths of the Great Recession, when the Fed slashed its rate to a record low near zero and kept it there until 2015. The economy is far healthier now despite risks to what’s become the longest expansion on record.

In addition to its rate cut, the Fed also said it would stop shrinking its enormous bond portfolio in August, two months earlier than planned. This step is intended to avoid putting upward pressure on long-term borrowing rates. The Fed had aggressively bought Treasury and mortgage bonds after the financial crisis to drive down long-term rates but had been gradually shrinking its balance sheet as the economy strengthened.

The Fed’s action Wednesday was approved 8-2 vote, with two dissents- Esther George, president of the Fed’s Kansas City regional bank, and Eric Rosengren, head of the Boston Fed, wanted to keep rates unchanged. It was the first time there have been as many as two dissents since December 2017 and suggested that Powell may face opposition if he seeks further rate cuts this year.

A fast-moving scrub fire threatened orchards, oil fields and homes while displacing thousands of residents in Southern California on Friday, even as diminishing winds helped fire crews tame a rash of wildfires elsewhere across the state. The latest in a spate of conflagrations that have kept California firefighters on the go for weeks roared to […]

Mr. Philippe’s victory could lead to a government reshuffle, although the French constitution allows him to appoint someone else to act as mayor while he remains Prime Minister Source: thehindu.com Related