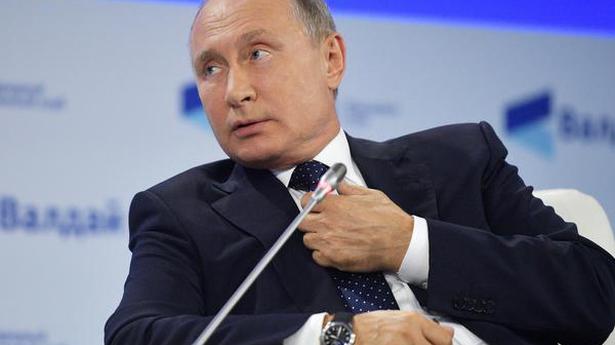 The Trump administration has imposed sanctions on a Moscow-based private railway company that last month opened passenger service between Russia and Crimea, a Ukrainian peninsula that Russia annexed in 2014.

The sanctions target Grand Service Express, its CEO and seven people who were slapped with European Union sanctions earlier in the week for their role in organizing Russian local elections on Crimea in September. The EU and the US imposed economic sanctions on Russia after the annexation and refuse to recognise Moscow’s authority over the region.

The Treasury Department handed down the new sanctions on Wednesday two days before Secretary of State Mike Pompeo is due in Kyiv to meet with the Ukrainian president and other officials. They may be intended to send a message of support from the Trump administration during the impeachment trial of President Donald Trump over his dealings with Ukraine.

“Treasury’s action, taken in close coordination with our international allies and partners, reiterates our unwavering support for restoring free and fair democratic processes in Crimea,” Treasury Secretary Steven Mnuchin said in a statement.

The sanctions may also serve to reduce the sting of Pompeo’s recent disparaging comment about Ukraine. Following an interview last week with NPR reporter Mary Louise Kelly, she said he shouted obscenities at her for asking about Ukraine and asked whether she thought Americans really cared about the country.

The railway connection to Crimea was inaugurated in late December by Russian President Vladimir Putin, who rode a train across the 12-mile (19-kilometer) bridge. The project is intended to bolster links between Russia and Crimea by increasing the transport of cargo and encouraging the flow of tourists.

SpaceX, known for its reusable rockets and astronaut capsules, is ramping up satellite production for Starlink, a growing constellation of hundreds of internet-beaming satellites. Source: thehindu.com Related

British Prime Minister Boris Johnson will limit Parliament’s ability to derail his Brexit plan by cutting the amount of time it will sit between now and EU exit day on Oct. 31, infuriating opponents who urged Queen Elizabeth to intervene. In his boldest move yet to take the country out of the European Union with […]

U.S. President Donald Trump escalated his attacks against four first-year Democratic congresswomen on Monday after earlier telling them to “go back” to the “places from which they came” in a series of weekend tweets that Democrats and other critics called racist. Mr. Trump’s fellow Republicans in Congress have had little public reaction to Mr. Trump’s […]