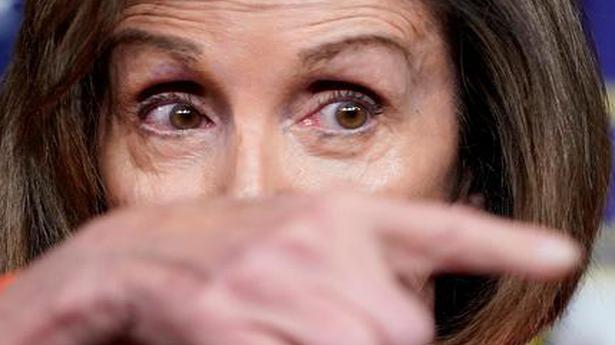 The U.S. Congress formally opened a new, public phase of its corruption investigation into Donald Trump on October 31 as U.S. lawmakers voted for the first time to advance the impeachment process targeting the U.S. President.

“Today the House takes the next step forward as we establish the procedures for open hearings… so that the public can see the facts for themselves,” House Speaker Nancy Pelosi said. “What is at stake in all of this is nothing less than our democracy.”

The top Democrat and Mr. Trump’s chief nemesis in Congress addressed fellow lawmakers shortly before her chamber took a Halloween morning vote along party lines — 232 to 196 — to pass a resolution that lays out rules for the next stages of the impeachment process.

Mr. Trump has repeatedly branded the process as illegitimate and politically motivated and, true to form, his reaction was swift. “The Greatest Witch Hunt In American History!” he boomed on Twitter.

He called on Republicans to rally behind him even as he faced the embarrassing likelihood of becoming the third president in history to be impeached and placed on trial for removal in the Senate, over an alleged extortion scheme to obtain Ukraine’s help to get him reelected in 2020.

The embattled President retweeted a rallying cry from Fox News host Laura Ingraham that called on Republicans to “stand together and defend the leader of their party against these smears”.

“This farce should never be allowed to roll into a winter show trial,” read the tweet — suggesting Mr. Trump would want the Republican leadership in the Senate to shut the process down.

Mr. Trump and loyal Republicans dismiss the case as a “sham”, but congressional investigators have heard a steady flow of corroborating evidence from government officials testifying behind closed doors on Capitol Hill.

The landmark resolution did not have unanimous Democratic approval. Two Democrats joined all Republicans in opposing the measure, although former Republican Justin Amash, now an independent, supported it.

The inquiry now moves into the public eye — giving Americans the chance to hear on live television the evidence against Mr. Trump.

The House Intelligence Committee, which has led the inquiry so far, will host open hearings, presenting witnesses and documentary evidence and allowing Republicans to challenge the case against Mr. Trump.

The minority can also suggest subpoenas but majority Democrats have final say, a rule that has angered Republicans.

“Trying to put a ribbon on a sham process doesn’t make it any less of a sham,” House Republican Jim Jordan fumed.

Democrats argue that the vote neutralises a key Republican talking point that the inquiry has no validity because the full House did not sign on.

Neither the House rules nor the U.S. Constitution require such a vote to start an impeachment inquiry.

If the case against Mr. Trump is deemed strong enough, the House Judiciary Committee will draw up formal charges against the President — articles of impeachment — to be voted on by the full House.

That process could be completed by year end. The Democrat-controlled House is expected to approve impeachment, which would then see Trump go on trial for removal in the Senate, where Republicans have a majority.

Democrats dismissed the charges that the process is partisan.

“There is serious evidence that President Trump may have violated the Constitution,” said Jim McGovern, Chairman of the House Rules Committee which drew up the resolution.

Nearly a dozen witnesses so far have confirmed in House depositions the accusations that, in a concerted effort with top aides and his personal lawyer, Mr. Trump pressured Ukraine to help his reelection effort in 2020 by producing dirt on Joe Biden, the former Vice-President.

The allegations focus on a July 25 phone call in which Mr. Trump pressed Ukraine President Volodymyr Zelensky to open investigations into Mr. Biden and Mr. Biden’s son, who worked with a Ukraine energy firm.

According to other witnesses, Mr. Morrison, who resigned late on October 30, has personal knowledge of the White House effort to freeze military aid to Ukraine to pressure Mr. Zelensky to launch the political investigations.

Mr. Bolton, other witnesses have said, disagreed strongly with Mr. Trump’s tactics toward Ukraine and the involvement of his personal lawyer Rudy Giuliani in Ukraine policy.

Madrasas in Sri Lanka should be regulated by the Muslim Religious and Cultural Affairs Ministry and not by the Education Ministry, Prime Minister Ranil Wickremesinghe has said, days after the country’s worst terror attack killed over 250 people. Authorities are on high-alert in the country after nine suicide bombers carried out a series of devastating […]

US is India’s preferred trade partner in journey to be $5 trillion economy: Sandhu

America is India’s preferred trade and business partner in its journey to become a $5 trillion economy by 2024, the country’s new envoy to the US Taranjit Singh Sandhu has said. Addressing a gathering of American business community at a reception hosted in his honour by US-India Strategic and Partnership Forum on Friday, Mr. Sandhu […]

Southeast Asian countries considered more emergency powers on Monday to tackle the threat of the virus as the biggest daily jump in cases in Malaysia took the number of infections in the region above 4,000. The virus has killed nearly 100 people since the number of cases started to shoot up early this month. Nearly […]