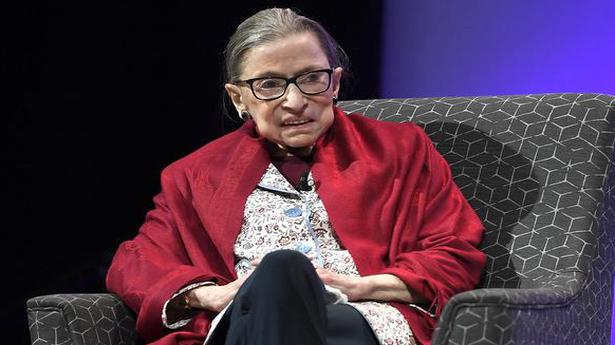 U.S. Supreme Court Justice Ruth Bader Ginsburg is the winner of this year’s $1 million Berggruen Prize for philosophy and culture.

The award announced on Wednesday by the Los Angeles-based Berggruen Institute honours Ms. Ginsburg for her pioneering legal work for gender equality and her support for the rule of law. The institute says Ms. Ginsburg will direct the money to charity.

She is the court’s oldest Justice, but maintains an active public speaking schedule that took her to the San Francisco Bay Area earlier this week. Ms. Ginsburg has been treated for cancer twice in the past 10 months.

Before joining the high court, she served 13 years as a federal appeals court judge in Washington, D.C.

The Berggruen Prize was established in 2016 by philanthropist Nicolas Berggruen to honour those who have “profoundly shaped human self-understanding and advancement.”

Mr. Berggruen said in an interview that Ms. Ginsburg played a leading role in gender equality. “She has done a lot to protect and further civil liberties. She has done a lot for women. That’s especially important in these times,” he said.

Ms. Ginsburg will receive the award on December 16 at a ceremony at the New York Public Library.

When she received a different foundation’s $100,000 award in 1996, Ms. Ginsburg directed the money to more than a dozen schools, performing arts groups and civil rights organisations, according to her financial disclosure report.

Amnesty International accused Hong Kong police on Friday of torture and other abuses in their handling of more than three months of pro-democracy protests, but the police say they have shown restraint on the street in the face of increased violence. Anti-government protesters, many masked and wearing black, have thrown petrol bombs at police and […]

Pakistan moved on Wednesday to cool a row with Afghanistan over reported comments by Prime Minister Imran Khan that were taken to suggest that Kabul should set up an interim government to help smooth peace talks with the Taliban. The comments, made to Pakistani journalists on Monday, prompted a furious reaction in Afghanistan and led […]

US President Donald Trump will meet Russian Foreign Minister Sergey Lavrov at the White House on Tuesday, over two years after his previous controversial visit to the country. Mr. Lavrov last visited the U.S. in May 2017 when Mr. Trump had just fired the then FBI director James Comey, who was probing Russia’s meddling in […]