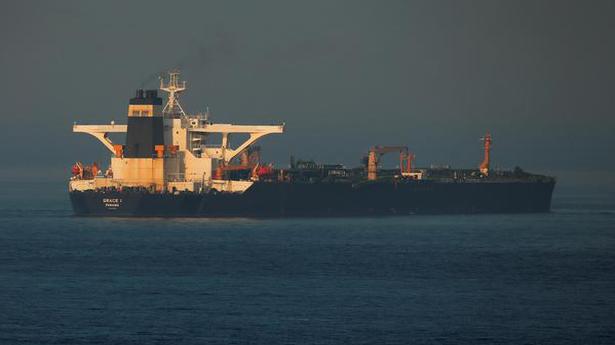 The United States moved on Thursday to halt the release of an Iranian supertanker detained in Gibraltar for breaching international sanctions on oil shipments, thwarting efforts by authorities in London and the British overseas territory to defuse tensions with Tehran.

The Gibraltar government confirmed earlier media reports that the U.S. Justice Department seeks to extend the detention of the oil tanker Grace 1, prompting the Supreme Court in the territory to adjourn a scheduled decision on whether to release the ship until later in the day.

“The U.S. Department of Justice has applied to seize the Grace 1 on a number of allegations, which are now being considered,” the Gibraltar government said in a statement, adding that the matter would be reviewed by the court at 4 p.m.

The Justice Department did not immediately respond to a request for comment.

Britain’s Foreign Office said in a statement that the “investigations conducted around the Grace 1 are a matter for the government of Gibraltar” and that it couldn’t comment further.

While there was no immediate reaction from Tehran, the U.S. move likely will further stir tensions in the Persian Gulf.

The Grace 1, carrying 2.1 million barrels of Iranian crude oil, was seized last month in a British Royal Navy operation off Gibraltar. The vessel was suspected of violating European Union sanctions on oil shipments to Syria, and its seizure deepened international tensions in the Persian Gulf. Iran called the seizure by Gibraltar an “act of piracy.”

Shortly after the detention of the Grace 1, Iran seized the British-flagged oil tanker Stena Impero, which remains held by the Islamic Republic. Analysts had hoped the release of the Grace 1 by Gibraltar would see the Stena Impero similarly released.

In past weeks, the Persian Gulf region has seen six attacks on oil tankers that the U.S. has blamed on Iran and the downing of a U.S. surveillance drone by Iranian forces. Iran has denied being behind the tanker attacks. Iran also has seized other oil tankers.

The Gibraltar government had said it was seeking to “de-escalate” the situation over the Grace 1. Signaling preparations for the expected release of the ship, the captain, an Indian national, and three officers of the Grace 1 were released from detention Thursday, the government said.

The whereabouts of the released crew, none of whom are Iranian, were not immediately known. The crew of the Grace 1 includes sailors from India, Pakistan and Ukraine, according to Iranian state television.

As speculation mounted over the Grace 1’s release, a lawyer representing the territory’s General Attorney Michael Llamas announced during a Thursday morning hearing at the Gibraltar Supreme Court that the U.S. had moved at the eleventh hour.

Speaking in court, Chief Justice Anthony Dudley said that were it not for the U.S. move, “the ship would have sailed,” the Gibraltar Chronicle reported.

This is the second time the Trump administration has moved to seize a ship in recent months. In May, the Justice Department announced that it had seized a North Korean cargo ship used to supply coal to the isolated nation in violation of international sanctions.

Tensions have escalated in the Persian Gulf region since Trump over a year ago unilaterally withdrew the U.S. from Iran’s 2015 nuclear deal with world powers. The decision stopped billions of dollars’ worth of business deals, largely halted the sale of Iran’s crude oil internationally and sharply depreciated Iran’s currency, the rial.

In recent weeks, Iran has begun to step away from the nuclear deal by increasing its production and enrichment of uranium. It has threatened to take further steps in early September if Europe can’t help it sell its oil abroad.

Lina Khatib, head of the Middle East and North Africa program at Chatham House, said the U.S. request on the Grace 1 was based on its own imposed sanctions on Iran.

“Although the U.S. expects its European allies to abide by these sanctions, it is up to the Gibraltar authorities to assess the allegations presented by the U.S.,” Ms. Khatib said. “The Gibraltar court could decide to hand over custody of the ship to the U.S., which would give the U.K. a much needed get-out clause from the tension caused by the ship’s seizure.”

Resolving the tanker dispute would help Prime Minister Johnson focus on domestic issues as he works to complete Britain’s exit from the European Union and prepare for anticipated national elections over the next few months.

Dryad Global, a U.K.-based maritime security consultant, earlier this week suggested the Grace 1 would soon be released, citing Britain’s domestic politics. But while a resolution to the tanker dispute could ease the situation at home, it may increase tensions with the U.S., Britain’s most important international ally.

The U.S. has been asking its allies to take part in a naval mission to protect shipping in the strategic Strait of Hormuz, at the Mouth of the Persian Gulf, though European nations have been reluctant.

Britain has so far been the only one to express willingness to join a maritime security mission. It has also been giving U.K.-flagged vessels a naval escort since the Iranian Revolutionary Guard’s seizure of the Stena Impero in the Gulf.

Chile withdrew on Wednesday as the host of an APEC summit next month at which the United States and China had been expected to sign a deal to ease a trade war that has hurt the global economy, as raging street protests gripped the South American country. The abrupt move – which came after weeks […]

Flight check-in services have been suspended at Hong Kong’s international airport, the airport authority said on Tuesday, citing disruptions caused by anti-government protests. Increasingly violent protests have plunged the Asian financial hub into its most serious political crisis in decades, posing a challenge to the central government in Beijing. The Airport Authority (AA) halted all […]

Seven U.S. States extend coronavirus shutdown to May 15, as Trump prepares to map out plan

Seven Northeastern States on Thursday extended a shutdown to contain the coronavirus pandemic until May 15, even as President Donald Trump prepared to detail his plan to end the lockdown in the least-affected U.S. States as early as May 1. Governor Andrew Cuomo extended his stay-at-home order by another two weeks despite a downward trend […]