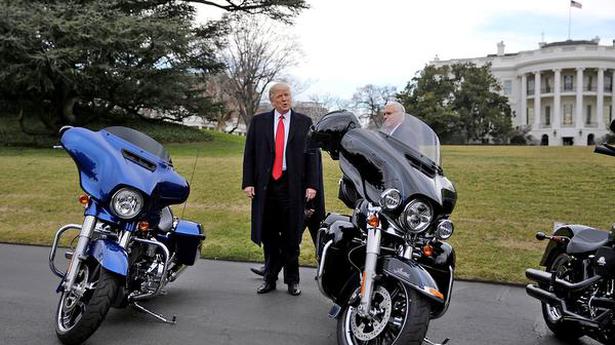 India’s high import tariff on the iconic Harley Davidson motorcycles has come in for criticism from U.S. President Donald Trump yet again.

In an interview with CNBC, focused on international trade, Mr. Trump took shots at India and a number of other countries.

“You look at India, a very good friend of mine, Prime Minister Modi, you take a look at what they have done, 100% tax on a motorcycle. We charge them nothing. So, when Harley sends it over there, they have 100% tax. When they send it, they make a tremendous number of motorcycles. When they send them, no tax,” Mr. Trump said.

Mr. Trump had first described this call days after it had happened in February 2018 and has repeatedly made references to the Harley issue and Indian tariffs. The President has also called India “tariff king”.

“But we’re the bank that everybody wants to rob. And that’s what they’ve been doing for a long period of time. $800 billion we have in trade deficits with other countries,” Mr. Trump said.

Mr. Trump is known to look at trade balances as a profit and loss statement – and has indicated that he sees U.S. bilateral trade deficits as a sign of there being an unfair trade relationship.

Indian Ambassador to the U.S., Harsh Shringla, like his predecessor, has stressed the efforts to bring down the trade surplus India has with the U.S., at speeches at events, highlighting defence and energy purchases. The goods trade surplus (from India’s perspective, deficit from the U.S.’s) stood at just above $ 21 billion in 2018 as per the United States Trade Representative (USTR).

Recently, preferential access to U.S. markets were withdrawn for India under the Generalized System of Preferences (GSP) program, after the President cited a lack of assurances from New Delhi on issues market access in India. GSP is one component of a larger Indo-U.S. trade relationship that has experienced several challenges during the Trump administration. Nevertheless, the total two-way trade between the countries has consistently been growing.

India was not alone in being targeted by Mr. Trump during Monday’s interview. He alluded to China’s currency manipulation, and said that if Chinese President Xi Jinping did not meet him at Osaka, Japan, where they will both be for the G20, tariffs on $ 300 billion Chinese imports into the U.S. would go into effect immediately.

“He’s [Mr. Xi] very strong and very smart but he’s for China and I am for the United States,” Mr. Trump said.

Mr. Trump complained about France charging tariffs on Californian wine when the U.S. allows French wine to come “in for nothing.”

The U.S. President also said the European Union was “attacking” U.S. companies and suggested the U.S. should be retaliating.

“Every week you see them going after Facebook and Apple and all of these companies, that are, you know, great companies but something is going on,” he said.

Ireland began voting in a general election on February 8, with Prime Minister Leo Varadkar hoping to secure a new term on the back of Brexit but voters likely to judge him more on his domestic record. Polls opened across the country at 0700 GMT (12.30 p.m. IST), although a small number of islands off […]

The British Airways has virtually grounded all flights after as many as 4,000 pilots have started a strike. Many flights from India to UK have been cancelled for Monday. The British Airline Pilots Association (Balpa) said that British Airways should share more of its profits with its pilots. British Airways issued a statement saying, “We […]

Bolivia’s interim government decided on Thursday to appeal to the U.N. High Commissioner for Refugees in an attempt to stop former president Evo Morales from influencing next year’s general election. Mr. Morales has remained heavily involved in politics and has been particularly vocal on social media since fleeing to Mexico last month following his resignation. […]