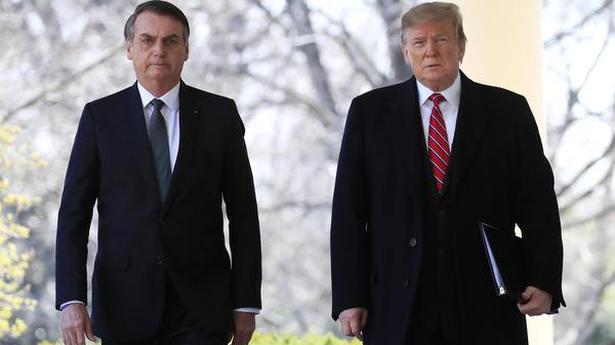 U.S. President Donald Trump has said that he intends to designate Brazil as a “major non-NATO ally”, a move aimed to cement America’s ties with the Latin American country where China has made deep strides in recent years.

The move by Mr. Trump gains significance as Brazil is a key member of the powerful five-nation BRICS grouping and has joined hands with India, Japan and Germany to become a permanent member of the UN Security Council.

Notably, Mr. Trump’s America considers two of its members, Russia and China, as major threats to its national security, while it is taking all steps to strengthen and deepen ties with India and Brazil.

Mr. Trump made the announcement during a joint Rose Garden press conference at the White House with visiting Brazilian President Jair Bolsonaro on Tuesday.

“We had a great meeting today. As I told President Bolsonaro, I intend to designate Brazil as a major non-NATO Ally, or even possibly, if you start thinking about it, maybe a NATO ally. We have to talk to a lot of people, but maybe a NATO ally,” Mr. Trump said.

The two countries, he said, are already working together to protect people from terrorism, transnational crime, drugs and weapons trafficking.

“We look forward to an even deeper partnership and working together,” he said.

“In our meetings, we also discussed the strong economic ties between our nations, grounded in the principles of fairness and reciprocity. My favourite word: reciprocity,” the U.S. President said.

Mr. Bolsonaro, who was often referred to as “Tropical Trump” before his election, said his meeting with the U.S. President has started a new chapter of cooperation between Brazil and the United States.

“Inasmuch as today, we have revisited and have again decided to promote matters that were on our order of business for decades,” he said.

“It is fair to say that, today, Brazil does have a President who is not anti-American, which was really unprecedented in the past few decades,” Mr. Bolsonaro said.

The two countries have decided to restore the CEOs’ Forum. “We also intend to attach priority to relaunching an energy forum with an emphasis on oil, gas, and other sources of energy,” the Brazilian President said.

In a joint statement, the two leaders later reiterated that the United States and Brazil stood with Interim President of Venezuela Juan Guaido, along with the democratically elected National Assembly and the Venezuelan people as they worked to peacefully restore constitutional order in Venezuela.

The U.S. and Brazil signed a Technology Safeguards Agreement, which will enable U.S. companies to conduct commercial space launches from Brazil, as well as an agreement between the National Aeronautics and Space Administration (NASA) and the Brazilian Space Agency to launch a jointly developed satellite in the near future.

Mr. Trump welcomed Brazil’s ongoing efforts regarding economic reforms, best practices and a regulatory framework in line with the standards of the Organization for Economic Cooperation and Development (OECD).

He noted his support for Brazil initiating the accession procedure to becoming a full member of the OECD.

“Commensurate with its status as a global leader, President Bolsonaro agreed that Brazil will begin to forgo special and differential treatment in World Trade Organisation negotiations in line with the United States proposal,” the joint statement said.

Syria vows to take back Golan Heights from Israel

The Syrian government vowed to take back the Israeli-occupied Golan Heights as its allies and enemies alike condemned U.S. President Donald Trump on Friday for moving to recognise Israeli sovereignty over the territory seized in war. Mr. Trump’s statement on Thursday marked a dramatic shift in U.S. policy over the status of a disputed area […]