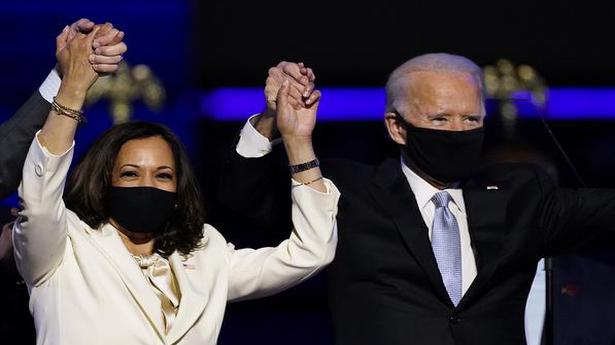 “We must restore the soul of America,” Mr. Biden said while celebrating his electoral victory along with Vice President-elect Kamala Harris.

President-elect Joe Biden has said that America is a “beacon for the globe” and that efforts must be made to “restore the soul” of the country.

“Tonight the whole world is watching America, and I believe that at our best, America is a beacon for the globe. We will lead not only by the example of our power, but by the power of our example,” Mr Biden said while addressing the nation for the first time as president-elect.

“We must restore the soul of America,” Mr. Biden said late on Saturday while celebrating his electoral victory along with Vice President-elect Kamala Harris.

He noted that America has always been shaped by “inflection points, by moments in time we’ve made hard decisions about who we are and what we want to be,” Mr. Biden said, hours after the 77-year-old Democrat was declared as the winner of the November 3 presidential election against incumbent US President Donald Trump, a Republican.

Also read: ‘I may be the first, but won’t be the last’: Kamala Harris in her first speech as VP-elect

“(Abraham) Lincoln in 1860 coming to save the union, FDR (Franklin D. Roosevelt) in 1932 promising a beleaguered country a new deal. JFK (John F Kennedy) in 1960 pledging a new frontier and when Barack Obama made history and told us: ‘Yes we can’

“Our nation is shaped by the constant battle between our better angels and our darkest impulses,” Mr. Biden continues. “Now, a president’s say in this battle matters. It’s time for our better angels to prevail,” the former Vice President said.

Since Mr. Trump took office as President, the image of the U.S. has suffered across many regions of the globe, the Pew Research Center said in a 13-nation survey released in September.

America’s reputation has declined further over the past year among many key allies and partners, it said as the country was struggling to contain the coronavirus, “In several countries, the share of the public with a favourable view of the U.S. is as low as it has been at any point since the Centre began polling on this topic nearly two decades ago,” Pew said on September 15.

German researchers plan to regularly test over 100,000 people to see if they have overcome infection with coronavirus (COVID-19) to track its spread, an institute behind the plan confirmed on Friday. India coronavirus lockdown, day 3 live updates | State Helpline numbers A spokeswoman for Brunswick’s Helmholtz Institute for Infectious Disease Research confirmed a report […]

Apple will be spending ‘vast sums’ of money in U.S., says Trump

U.S. President Donald Trump said he was having dinner on Friday with Chief Executive Officer Tim Cook of Apple Inc, a company the president has criticized for not manufacturing more of its products in the United States. “Having dinner tonight with Tim Cook of Apple. They will be spending vast sums of money in the […]