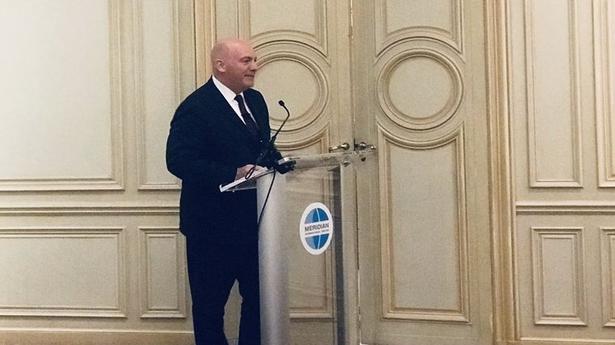 A month after External Affairs Minister S. Jaishankar said he was “reasonably convinced” that he could persuade the U.S. of India’s decision on the S-400 Russian missile defence system, the top U.S. diplomat for Political Military Affairs, Clarke Cooper, called out Russia and China for exploiting countries’ security requirements while making a strong pitch for the U.S. being the defence partner of choice.

Countries like Russia and China are using arms sales and security assistance to weaken the U.S.’s global influence and strengthen their own, Mr. Cooper said at the Meridian International Center, a Washington-based think-tank, on October 31.

“Through the targeted marketing of systems like the S-400, Russia seeks to exploit the genuine security requirements of partners to create challenges in our ability — legal and technological — to provide them with the most advanced defensive capabilities.”

India had decided to buy the S-400 for $5.2 billion in 2018 — a decision that could potentially attract U.S. sanctions under a law called Countering America’s Adversaries Through Sanctions Act (CAATSA). While the U.S. President has the authority to grant waivers under various conditions, the administration has repeatedly (including earlier in October in response to Mr. Jaishankar’s comments) cautioned countries, including India, that it is at risk of sanctions if it goes ahead with the Russian deal.

However, Mr. Cooper said on October 31 that there was no “blanket application” of CAATSA laws.

“It can be scalable depending on what the issue is, scalable as far as application of when it’s issued, timeline-wise, and to what sections would be applied, where.”

The U.S. had warned Turkey, a NATO ally that is buying the S-400, of CAATSA sanctions, though these have not yet been imposed. Turkey was, however, kicked out of a programme to build American F-35 jets, in July this year.

Mr. Clarke clarified that CAATSA was not intended to target historical “sustainment” lines countries had with Moscow but designed to “mitigate new significant acquisitions”.

China too was named during the speech. “China is using arms transfers as a means of getting its foot in the door — a door that, once is opened, China quickly exploits both to exert influence and to gather intelligence,” Mr. Cooper said.

Parts of the U.S. government — including the Congress — are concerned about waning U.S. influence in the world – a position that is at odds with the sometimes isolationist strategies of President Donald Trump.

“I stand before you at a very difficult time for American Partnerships,” Mr. Cooper said.“…For the first time, perhaps since the end of the Cold War, many nations look at partnering with America on matters of defence and security not as an imperative, but as one of several options.”

The Bureau of Political Military Affairs, which Mr. Cooper heads as Assistant Secretary, is the State Department’s interface with the Defense Department, and oversees security assistance and Foreign Military Sales.

In addition to outlining case studies where Russian or Chinese equipment failed, Mr. Cooper said the debate in Washington around arms transfers “appears more politicised than ever”.

He also made a case for the U.S. as a supplier, saying there is transparency and accountability in policymaking and efficiency in the process.

“A partnership with America offers something a purchase from Russia or China never will: friendship,” Mr. Cooper said.

However, the U.S.’s insistence over the past year that countries stop buying Iranian oil and, for longer, that they not buy Russian weapons, has caused challenges in at least some of its relationships with allies and partners.

Iranian investigators said Thursday the crew members of the Ukrainian jetliner that crashed on Wednesday never made a radio call for help and were trying to turn back to the airport when the plane went down. Iran’s civil aviation authority made the comments in a preliminary crash report a day after the crash of the […]

New Zealand’s deputy prime minister is attending an emergency session of an umbrella organization of Muslim nations in Turkey after a gunman killed 50 people in two mosques in the South Pacific nation. Winston Peters was in Istanbul on Friday for the 57-member Organization of Islamic Cooperation’s executive committee meeting. Australian Brenton Harrison Tarrant was […]

Indian couple on trial in Germany for spying on Sikh, Kashmiri groups

An Indian couple accused of spying on Kashmiri and Sikh groups in Germany, and sharing information with Indian intelligence agents, went on trial on Thursday in Frankfurt on charges that carry a sentence of up to 10 years in prison. Manmohan S. and his wife Kanwal Jit K. were charged with foreign secret service agent […]