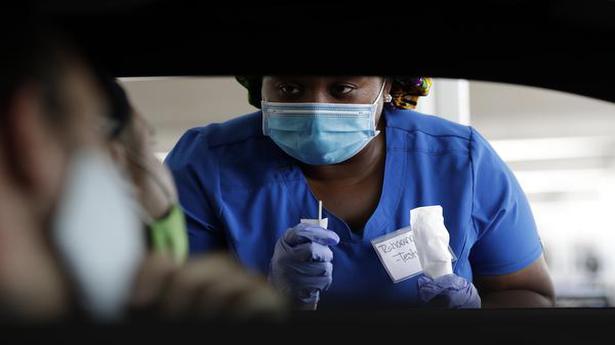 Deaths are climbing again, reaching an average of more than 930 a day.

The United States has surpassed 1 million new confirmed coronavirus cases in just the first 10 days of November, with more than 100,000 infections each day becoming the norm in a surge that shows no signs of slowing.

The 1 million milestone came as Governors across the nation are making increasingly desperate pleas with the public to take the fight against the virus more seriously.

The Wisconsin Governor planned to take the unusual step of delivering a live address to the state Tuesday, urging unity and cooperation to fight COVID-19.

Minnesota’s Governor ordered bars and restaurants to close at 10 p.m., and Iowa’s governor said she will require masks at indoor gatherings of 25 or more people, inching toward more stringent measures after months of holding out.

The alarming wave of cases across the U.S. looks bigger and is more widespread than the surges that happened in the spring, mainly in the Northeast, and then in the summer, primarily in the Sun Belt. But experts say there are also reasons to think the nation is better able to deal with the virus this time around.

“We’re definitely in a better place when it comes to improved medical tools and knowledge,” said William Hanage, a Harvard University infectious-disease researcher.

Newly confirmed infections in the U.S. are running at all-time highs of well over 100,000 per day, pushing the running total to more than 10 million and eclipsing 1 million since Halloween.

The Hindu Explains | Why is Phase-3 of COVID-19 vaccine trial complicated?

Deaths — a lagging indicator, since it takes time for people to get sick and die — are climbing again, reaching an average of more than 930 a day.

Hospitals are getting slammed. And unlike the earlier outbreaks, this one is not confined to a region or two. Cases are on the rise in 49 states.

The virus is spreading in a largely uncontrolled fashion across the vast majority of the country, said Dr. William Schaffner, an infectious-disease expert at Vanderbilt University.

But there is also some good news.

Doctors now better know how to treat severe cases, meaning higher percentages of the COVID-19 patients who go into intensive care units are coming out alive. Patients have the benefit of new treatments, namely remdesivir, the steroid dexamethasone and an antibody drug that won emergency-use approval from the Food and Drug Administration on Monday. Also, testing is more widely available.

In addition, a vaccine appears to be on the horizon, perhaps around the end of the year, with Pfizer this week reporting early results showing that its experimental shots are a surprising 90% effective at preventing the disease.

And there’s a change pending in the White House, with President-elect Joe Biden vowing to rely on a highly respected set of medical advisers and carry out a detailed coronavirus plan that experts say includes the kind of measures that will be necessary to bring the surge under control.

Mr. Biden pledged during the campaign to be guided by science, make testing free and widely available, hire thousands of health workers to undertake contact-tracing, and instruct the Centers for Disease Control and Prevention to provide clear, expert advice.

“We are already seeing encouraging signs from President-elect Biden with regard to his handling of COVID-19,” said Dr. Kelly Henning, a veteran epidemiologist who heads the Bloomberg Philanthropies’ public health programs.

“I am relieved to see he’s already put some of the smartest scientific minds on his new coronavirus task force and that they are acting urgently to try and get the pandemic under control as quickly as possible.”

While the first surge in the Northeast caught many Americans unprepared and cut an especially deadly swath through nursing homes, the second crest along the nation’s Southern and Western rim was attributed mostly to heedless behavior, particularly among young adults over Memorial Day and July Fourth, and hot weather that sent people indoors, where the virus spreads more easily.

The fall surge similarly has been blamed largely on cold weather driving people inside and disdain for masks and social distancing, stoked by President Donald Trump and other politicians.

Even in parts of the country that have been through coronavirus surges before, you see people breaking out of it and letting their guard down, Schaffner said.

“There really is COVID fatigue that is blending into COVID annoyance”, he said.

The short-term outlook is grim, with colder weather and Thanksgiving, Christmas and New Year’s ahead. Generations of family members gathering indoors for meals for extended periods is not a recipe for anything good, Hanage said.

Indian-American Congressman Raja Krishnamoorthi has introduced a resolution in the US House of Representatives celebrating Mahatma Gandhi’s 150th birth anniversary and his enduring legacy. “Mahatma Gandhi is one of my personal heroes,” Mr. Krishnamoorthi said after introducing the resolution on Friday. The resolution was cosponsored by a bipartisan group of 14 other lawmakers. “Gandhi’s dedication […]

An Australian man pleaded not guilty on Friday to 92 charges stemming from a massacre in two mosques in the New Zealand city of Christchurch three months ago and will stand trial in May next year. A lone gunman armed with semi-automatic weapons attacked Muslims attending Friday prayers in Christchurch on New Zealand’s South Island […]

Hundreds of koalas are feared to have burned to death in an out-of-control bushfire on Australia’s east coast, wildlife authorities said on Wednesday. A bushfire believed to have been sparked by a lightning strike on Saturday some 400 kilometres north of Sydney has ravaged an area of over 2,000 hectares (4,942 acres) with authorities battling […]