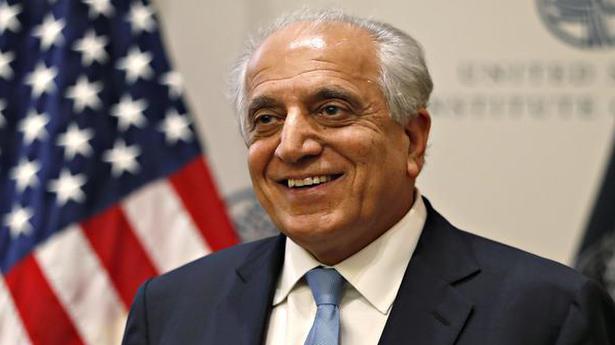 The U.S. special envoy for peace in Afghanistan wound up on Tuesday the seventh round of talks he has held with the Taliban in Qatar, after signs of progress in efforts to end the longest war the United States has ever fought.

The U.S. envoy, Zalmay Khalilzad, met Taliban officials briefly a day after a delegation of Afghan citizens and the militants agreed on a “roadmap for peace”, in particular a joint call to end civilian casualties in the 18-year war.

“Khalilzad will now brief his bosses and they will make an announcement. The seventh round has ended,” said a senior official privy to the talks.

The United States and the Taliban are getting closer to a deal that is expected to be centred on a U.S. promise to withdraw troops in exchange for a Taliban promise not to let Afghanistan be used as a base for terrorism, officials say.

Last week, Mr. Khalilzad said the latest round of talks, which began on June 28, was the “most productive” since the effort began late last year, with progress on a counter-terrorism assurance, a troop withdrawal, dialogue between rival Afghans and a ceasefire.

Mr. Khalilzad, in a post on Twitter, said he was heading to China and then back to Washington “to report and consult on the Afghan peace process”.

Senior Western officials and diplomats in Kabul who are privy to the talks, said the U.S. government was expected to make an announcement after a briefing from Mr. Khalilzad.

“The stage is now being set for a political settlement between the U.S. and the Taliban,” said a senior western official who is privy to the negotiations.

The Taliban have refused to negotiate with the government, denouncing it as a U.S. puppet, but in an effort to foster Afghan reconciliation, a 60-strong delegation of citizens met the Taliban for two days of talks in Qatar from Sunday.

The two sides said in a joint statement late on Monday they had agreed to a roadmap and were both “committed to respect and protect the dignity of people, their life and property and to minimize the civilian casualties to zero”.

The two sides also promised to guarantee the security of public institutions such as schools, hospitals and markets.

But on Sunday, as the Afghan rivals sat down for talks in Qatar, Taliban fighters detonated a car bomb outside a government compound in the central town of Ghazni, killing 14 and wounding more than 100, including scores of children in a school.

Seven civilians were killed in a government air strike in the north late on Monday, the Ministry of Defence said in a statement, adding that strike was conducted for the “elimination of the enemy”.

According to the United Nations, 3,804 civilians – including more than 900 children – were killed and 7,000 wounded in 2018, the deadliest year for civilians in the conflict.

The Taliban control and influence more territory than at any point since they were ousted in 2001.

Mr. Trump said he wanted to pull U.S. troops out of Afghanistan but was concerned that without a U.S. military presence, it could be used as a base for terrorist attacks on the United States.

U.S. Secretary of State Mike Pompeo said recently the United States wanted a deal with the Taliban by Sept. 1 – ahead of an Afghan presidential election due at the end of the month.

Two persons, including a 10-year-old girl, died and five others suffered critical injuries after a massive fire broke out in a shopping mall in Pakistan’s Punjab province on Wednesday, officials said. Dozens of shops, apartments and vehicles were also gutted in the blaze, which erupted at the 12-storey Alina Shopping Mall in Gujrat city, some […]

Top news of the day: Pakistan to release 100 fishermen next week, SC stays eviction order against AJL in National Herald case, and more

Pakistan will release 100 jailed Indian fishermen on Monday, diplomatic sources on both sides have confirmed. Pakistani officials have intimated India that the 100 fishermen will be released from prison on April 7 and taken to the Wagah border for repatriation to India the next day, the sources said. The Supreme Court on Friday stayed […]

Comedic duo Amy Poehler and Tina Fey are set to host the Golden Globes in 2021. National Broadcasting Company (NBC) Universal made the announcement at the Television Critics Association’s press tour on Saturday. “NBC has long been the home to two of the funniest people on the planet — Tina Fey and Amy Poehler and […]