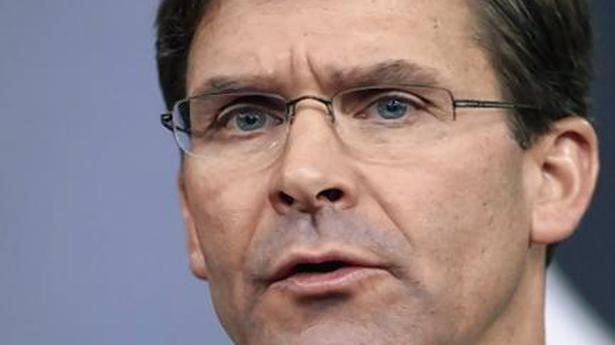 The U.S. is considering to keep some troops in northeastern Syria to stop oil falling into the hands of Islamic State or others but no decision has yet been made, Defense Secretary Mark Esper said.

President Donald Trump decided earlier this month to withdraw all 1,000 U.S. troops from the region, a move widely criticised as a betrayal by Kurdish allies who had fought for years alongside them against Islamic State.

U.S. troops crossed into Iraq early on Monday as part of the withdrawal process. Mr. Trump began pulling U.S. troops back from northeastern Syria in early October, opening the way for Turkish troops to launch an offensive against the Kurdish fighters.

“We have troops in towns in northeast Syria that are located next to the oil fields, the troops in those towns are not in the present phase of withdrawal,” Mr. Esper told reporters during a visit to Afghanistan.

“The purpose is to deny access, specifically revenue to ISIS (Islamic State) and any other groups that may want to seek that revenue to enable their own malign activities,” he said.

Mr. Esper said there had been discussions about keeping some of the U.S. troops, who were with the Syrian Democratic Forces (SDF), in place. He said he had not presented that option yet, but the Pentagon’s job was to look at different options.

The SDF, spearheaded by the Kurdish YPG militia, has been the main partner for the U.S.-led coalition in Syria. “There has been a discussion about possibly doing it (keeping some troops), there has been no decision with regard to numbers or anything like that,” Mr. Esper added.

A Reuters cameraman saw more than 100 vehicles carrying U.S. troops crossing from the northeast tip of Syria, where Turkey has agreed to pause its offensive for five days. The truce expires late on Tuesday.

Turkish President Tayyip Erdogan has warned that Ankara will resume its military assault in Syria when the deadline expires if the SDF have not pulled back from its proposed safe zone area spanning the border. Ankara considers the YPG a terrorist group because of its links to Kurdish insurgents in southeast Turkey.

“We will take up this process with Mr. Putin and after that we will take the necessary steps,” Mr. Erdogan told a forum in Istanbul hosted by broadcaster TRT World, without elaborating further.

Mr. Erdogan is due to hold talks with Mr. Putin on Tuesday.

U.S. to impose tariffs on Brazil and Argentina

President Donald Trump on Monday accused Argentina and Brazil of hurting American farmers through currency manipulation and said he’ll slap tariffs on their steel and aluminum imports to retaliate. Mr. Trump also called on America’s central bank to take action to prevent other countries from devaluing their currencies. Both South American nations were among a […]

With 185 new cases and two deaths due to COVID-19 reported in the last 24 hours, the Union Health Ministry on March 28 announced a change in strategy with increased focus on high-disease burden hotspots across India. Working with the State governments, there will be intensified efforts to strengthen community surveillance, contact tracking and containment strategy, officials […]

US President Donald Trump on Monday made a brief unscheduled appearance at the UN Climate Action Summit here and heard Prime Minister Narendra Modi’s address on climate change. Trump was not scheduled to attend the summit. The president listened intently for about 10 minutes before departing for his religious freedom event. World leaders gathered in […]