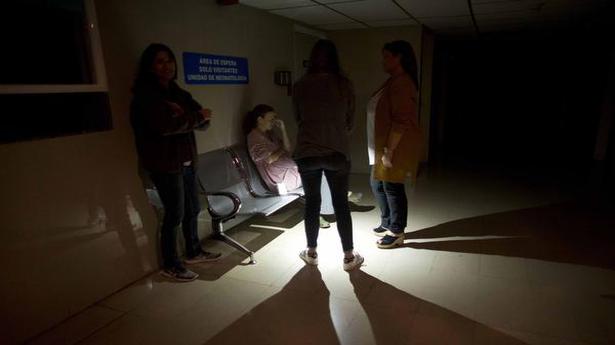 The United States will withdraw all remaining diplomatic personnel from its embassy in Caracas as the crisis in Venezuela deepens, Secretary of State Mike Pompeo has said.

The move worsens already tattered relations, with President Donald Trump having said he rules out no options including military intervention to oust President Nicolas Maduro, even as Washington monitors rapidly unfolding events in the oil-rich but crippled South American nation supported by Russia and China.

The U.S. has already imposed sanctions designed to choke off Venezuelan oil sales, the lifeblood of the leftist government in Caracas.

Much of Venezuela has been without electricity for going on five days now due to a power outage that the government blames on what it calls “sabotage encouraged by the U.S.”

Venezuela is in the grips of an acute economic crisis that has fueled the rise of opposition leader Juan Guaido, the national assembly speaker who, in late January, declared himself to be the interim leader. More than 50 countries led by the U.S. have endorsed him.

“This decision reflects the deteriorating situation in #Venezuela as well as the conclusion that the presence of US diplomatic staff at the embassy has become a constraint on U.S. policy,” Mr. Pompeo wrote on Twitter on Monday.

On January 24, the State Department ordered all non-emergency government employees to depart Venezuela and urged Americans living in the country to consider leaving.

Earlier on Monday, Mr. Pompeo took aim at Cuba and Russia for their support of Mr. Maduro.

He rejected Mr. Maduro’s assertion that the U.S. was responsible for the blackout, instead pointing the finger at the socialist nature of the Venezuelan government.

“Nicolas Maduro promised Venezuelans a better life and a socialist paradise. He delivered on the socialism part, which has proved, time and time again, is a recipe for economic ruin,” Mr. Pompeo told journalists.

“The paradise part? Not so much.”

Mr. Pompeo took aim at the “central role Cuba and Russia have played and continue to play in undermining the democratic dreams of the Venezuelan people and their welfare.”

“Cuba is the true imperialist power in Venezuela,” Mr. Pompeo said, denouncing the “physical protection and other critical material and political support to Maduro and to those around him.”

“When there is no food, thank the Cuban communist overlords.”

Ethiopian Prime Minister Abiy Ahmed won the Nobel Peace Prize 2019 for his efforts to resolve the long-running conflict with neighbouring foe Eritrea. He received the award for his efforts to achieve peace and international cooperation, and in particular for his decisive initiative to resolve the border conflict with neighbouring Eritrea, a statement from the […]

Sri Lankan police are trying to track down 140 people believed to be linked to the Islamic State, which claimed responsibility for the Easter Sunday suicide bombings that killed 253, as shooting erupted in the east during a raid. Muslims in Sri Lanka were urged to pray at home after the State Intelligence Services warned […]

Tensions between Iran and the U.S. have escalated since the Trump administration withdrew from the nuclear deal between Tehran and six world powers in 2018 and reimposed crippling U.S. sanctions. Source: thehindu.com Related