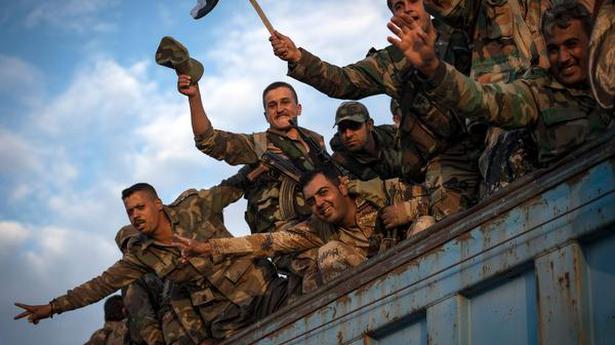 The U.S. will strengthen its military presence in Syria with “mechanised forces” to prevent Islamic State fighters seizing oil fields and revenue, the U.S. Defense Secretary said on Friday, the latest twist in President Donald Trump’s confusing policy on Syria.

Mr. Trump has been softening his pullout plans for Syria after a backlash from Congress, including among key Republicans, who say he enabled a long-threatened Turkish incursion against Kurdish forces in Syria who had been America’s top allies in the battle against Islamic State.

“We are now taking some actions… to strengthen our position at Deir al zor, to ensure that we can deny ISIS access to the oil fields,” Defense Secretary Mark Esper told reporters during a press conference.

“We are reinforcing that position, it will include some mechanised forces,” Mr. Esper said. Mechanised forces usually include tanks and other military assets.

He did not say how many forces were currently in the region or how many additional forces would be sent.

The vacuum left by Mr. Trump’s partial withdrawal has created an opening that Russia exploited by moving forces into the area.

Around 300 more Russian military police have arrived in Syria, the Russian Defence Ministry said on Friday, under an accord between Ankara and Moscow which halted Turkey’s military incursion into northeast Syria.

A 15-member delegation from Pakistan is preparing to present its case to the Financial Action Task Force (FATF) Asia Pacific Group (APG) in a face-to-face meeting in Bangkok as part of efforts to exclude its name from grey list’. Pakistan’s delegation, led by their minister for economic affairs Hammad Azhar, will be responding to over […]

Myanmar’s former pro-democracy icon Aung San Suu Kyi on Wednesday denied that her country’s armed forces committed genocide against the Rohingya minority, telling the U.N.’s top court that the exodus of hundreds of thousands of Muslims was the unfortunate result of a battle with insurgents. In a measured tone, Ms. Suu Kyi calmly refuted allegations […]

A US congressional panel on Friday gave President Donald Trump one week to say whether his legal counsel intends to introduce evidence and call witnesses in upcoming impeachment proceedings that could lead to formal charges of misconduct within a few weeks. The Democratic-led House Judiciary Committee, which is due to begin weighing possible articles of […]