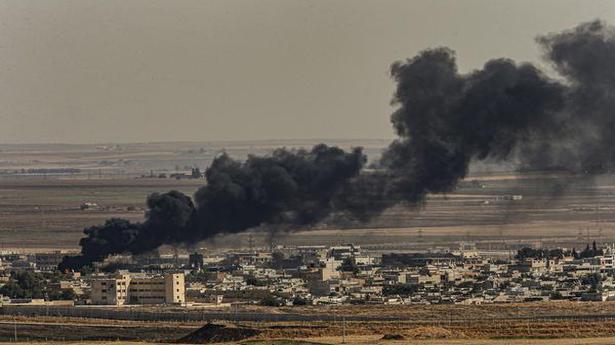 The U.S. is poised to evacuate about 1,000 U.S. troops from northern Syria amid an ongoing Turkish offensive into the region, Defence Secretary Mark Esper said on Sunday, calling the situation “untenable” for U.S. forces.

The withdrawal of the troops from the region comes after U.S. President Donald Trump abruptly shifted policy and withdrew some U.S. troops deployed to support Kurdish forces in the fight against Islamic State.

That decision in turn helped open the door for Turkey to launch an offensive against the Syrian Democratic Forces (SDF).

“In the last 24 hours, we learned that [the Turks] likely intend to extend their attack further south than originally planned, and to the west,” Esper said in a pre-taped interview with “Face the Nation” on CBS.

“We also have learned in the last 24 hours that the … SDF are looking to cut a deal, if you will, with the Syrians and the Russians to counterattack against the Turks in the north.”

Mr. Esper said he spoke with Mr. Trump on Saturday night, and that the President directed the U.S. military to “begin a deliberate withdrawal of forces from northern Syria.”

He said the U.S. knew ahead of time about Turkish President Recep Tayyip Erdogan’s intentions to cross the border into Syria.

He added that the U.S. simply did not have enough troops to stop a Turkish advance and they needed to be taken out of harm’s way. “There is no way they could stop 15,000 Turks from proceeding south,” he said.

Turkey’s offensive has raised alarm bells around the world amid concerns about its impact on civilians and the possibility of Islamic State militants escaping from Kurdish-led authorities.

Meanwhile, the Kurdish-led administration in northern Syria said 785 foreigners affiliated with Islamic State managed to escape a camp where they were being held following Turkish shelling on Sunday.

In apparent reference to Turkish-backed rebels, the Kurdish-led administration said “mercenaries” attacked the camp where “Daesh elements” — a reference to Islamic State — in turn, attacked camp guards and opened the gates.

The Kurdish-led Syrian Democratic Forces (SDF) hold swathes of territory that was once part of Islamic State’s “caliphate”.

The SDF has been keeping thousands of IS jihadists in jail and tens of thousands of their family members in camps.

SDF official Marvan Qamishlo told Reuters there were not have enough guards for the camp, which is north of Raqqa and about 30 km south of the Turkish border.

Iranian authorities briefly detained Britain’s ambassador in Tehran on Saturday, according to Foreign Secretary Dominic Raab, after he was reportedly arrested during protests against the regime. “The arrest of our ambassador in Tehran without grounds or explanation is a flagrant violation of international law,” Mr. Raab said in a statement after the detention of Rob […]

A U.S. federal judge on Friday struck down one of President Donald Trump’s initiatives to curtail asylum claims, ruling that the government could not reject migrants who had crossed the border illegally. A different federal judge had already put a temporary block on the policy, which would have rejected asylum claims from people who entered […]