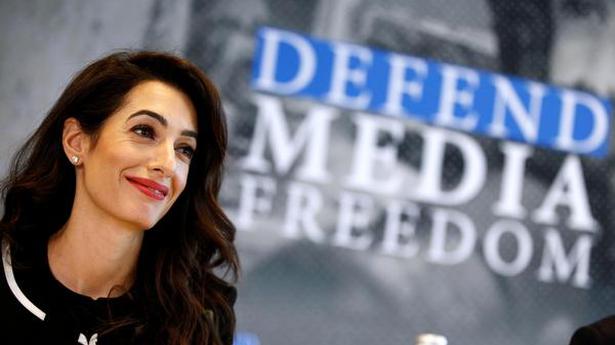 Ms. Clooney pointed to India as one of the five countries where journalists were most at the risk of “political assassination for their work” , alongside Brazil, as she also noted that such attacks also happened in Europe as well, with the assassination of the Maltese journalist Daphne Caruana Galizia. She also highlighted the brutal murder of Jamal Khashoggi in the Saudi consulate in Istanbul last year.

“We are here because it’s never more dangerous to report the news,” Ms. Clooney said at a press conference in London, alongside Britain’s Foreign Secretary Jeremy Hunt and Canadian Minister for Foreign Affairs Chrystia Freeland, who are co-hosting the conference in London on July 10-11. UNESCO estimates that at least 99 journalists were killed in 2018. “Many thousands more have been attacked, harassed, detained or imprisoned on spurious charges,” UN Secretary General Antonio Guterres warned in a speech earlier this year.

“There are few places in the world where journalists are not threatened, harassed, disenfranchised, or subject to self-censorship,” Ms. Clooney warned, pointing to “vague laws,” and “corrupt courts,” being used to silence dissent and “muzzle the media.” “Targeting journalists undermines democracy and impedes our ability to hold the powerful to account.”

Ms. Clooney will chair a panel of legal experts who will work to “support countries to repeal outdated and draconian laws and strengthen legal mechanisms to protect journalists.” Among the steps that could be taken by the panel include making proposals to countries of concern around national laws that don’t comply with international standards, particularly around issues such as blasphemy and overly stringent anti-defamation rules.

She said the panel could also prepare mechanisms that could be used internationally to “raise the cost of non-compliance” with international standards, such as advising on sanctions regime that could be put in place relating to regimes that abused journalists. They could also work towards bringing together countries across the world who would commit to concrete measures.

Some of the laws globally that hurt journalists dated back to the colonial era, which meant that the UK was “uniquely placed” to push for change.

Mr. Hunt rejected suggestions that Britain would be wary of raising concerns about media freedom with countries that had a chequered track record on media freedom. “Post Brexit we will have complete control over sanctions policy…we have always shown we are willing to have difficult conversations with countries that are our friends and strategic partners as much as countries that don’t have those close relationships,” he said in response to a question around whether the UK would be willing to raise questions with countries such as Turkey, Myanmar, and the Gulf states. “What we are seeking to do is build international consensus around what is and isn’t acceptable and to strengthen international norms around the protection of journalists.”

Ms. Clooney has taken on a number of cases involving journalists and media freedom in recent years. She is part of the legal team seeking the release of two Reuters journalists in Myanmar, and was part of the team for one of two Al Jazeera journalists imprisoned in Egypt in Egypt for more than 400 days before being freed in 2015.

Sri Lanka will enforce a state of emergency from midnight on Monday in the wake of the deadly Easter blasts that killed 290 people and injured more than 500 others, enhancing the counter terrorism powers of of the security forces. The decision was made during a meeting of the National Security Council (NSC) chaired by […]

Uber has lost its license in London. Transport for London cited “several breaches that placed passengers and their safety at risk” including concerns about imposter drivers.  London represents 3% to 5% of Uber’s business. Uber has 21 days to file an appeal and can continue operating during the appeals process. It posted a $1.16 billion loss in the […]