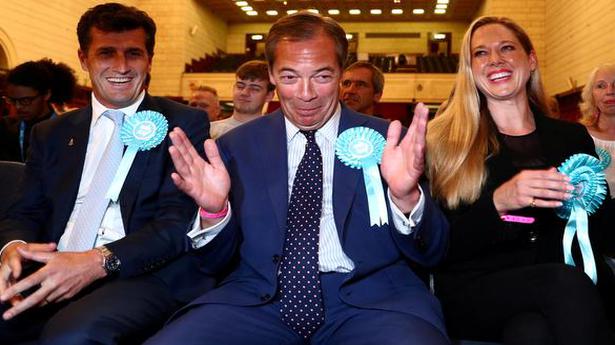 With results announced early Monday for all of England and Wales, the Brexit Party had won 28 of the 73 British EU seats up for grabs and almost a third of the votes. The Liberal Democrats took about 20% of the vote share and 15 seats up from only one at the last EU election in 2014. Scotland and Northern Ireland will announce their results later.

Labour came third with 10 seats, followed by the Greens with seven. The ruling Conservatives, apparently blamed by voters for failing to deliver Brexit in March as planned, were in the fifth place with just three EU seats and under 10% of the vote share.

Britain is participating in the EU election because it is still a member of the bloc, but the lawmakers it elects will sit in the European Parliament only until the country leaves the EU, which is currently scheduled for Oct. 31.

The vote was more or less split between Farage’s pro-Brexit forces and the pro-EU Liberal Democrats and Greens, at the expense of the more established parties.

Farage’s Brexit Party, which favors even a no-deal Brexit, was one of the several nationalist and populist parties making gains across the continent. A triumphant Farage said that his party will “stun everbody” in the next British general election if the country still hasn’t left the European Union. “We’re not just here to leave the European Union but to try and fundamentally change the shape of British politics, bring it into the 21st century and get a Parliament that better reflects the country,” he said.

Farage’s gains also contributed to the Conservative Party’s dismal performance. Foreign Secretary Jeremy Hunt, who is contending to become the party leader and Prime Minister after Theresa May announced that she will quit in June, said that it was a “painful result” and warned that there was an “existential risk to our party unless we now come together and get Brexit done.”

On the other hand, some senior Labour figures said that after the party’s weak performance it must now take a strong stance in favor of a second referendum on Brexit. “There should be a (new Brexit) referendum and we should campaign to remain,” said Labour foreign affairs spokeswoman Emily Thornberry.

But party leader Jeremy Corbyn declined to make his position clear, who says that the country needs either a general election or a referendum on Brexit. “With the Conservatives disintegrating and unable to govern, and the Parliament deadlocked, this issue will have to go back to the people, whether through a general election or a public vote,” he said, promising more “conversations” in the coming days.

While the mandate reflects an electorate which is deeply divided over Britain’s 2016 decision to leave the EU, it also raises the likelihood of a chaotic “no deal” exit from the EU and also of a new referendum that could reverse the decision to leave.

After Theresa May announced her June exit, Britain’s new prime minister will be whoever wins the Conservative party leadership race to replace her. The favorites, including ex-Brexit Secretary Dominic Raab and former Foreign Secretary Boris Johnson, have vowed to leave the EU on Oct. 31 even if there is no deal in place.

The United States and China have been engaged in a series of retaliatory actions involving journalists in recent months. Source: thehindu.com Related