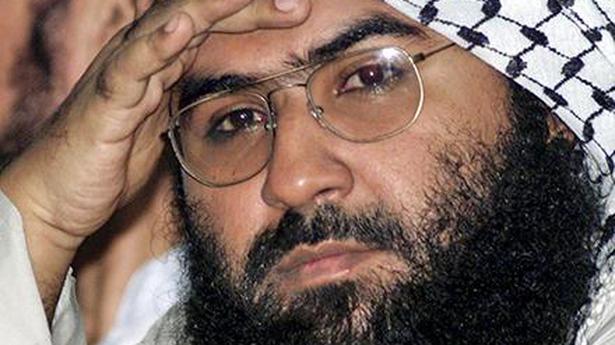 Jaish-e-Mohammad chief Masood Azhar was listed as a designated terrorist by the UN Security Council 1267 Committee on Wednesday. Significantly, the reasons for listing did not mention the Pulwama attack of February 14, for which the JeM had claimed responsibility, and which found mention in the latest (February 27) listing request for Azhar.

Nevertheless, the listing is a victory for India in a decade-old diplomatic battle waged primarily by it and supported by its friends at the UNSC, as it would mean a travel ban, arms embargo and asset freeze on Azhar.

The P-3 or group of three permanent UNSC members, the U.S., the U.K. and France, had co-sponsored a listing request at the Committee on February 27, weeks after the Pulwama attack that killed over 40 security personnel. That request, which The Hindu has access to, reads, “…JeM claimed responsibility for a suicide attack in Pulwama”.

However, China placed a hold on the request — which normally lasts for three months — on March 13. This was the fourth such attempt to designate Azhar, over a decade, that had gone awry.

At the end of March, the U.S. circulated a draft resolution (to sanction Azhar) among the UNSC members, i.e., outside the 1267 Committee, presumably to pressure China into either supporting the listing or having to take a stand in open proceedings and risk being seen as supporting terror.

Earlier this week, China had said “some progress” had been made and indicated it was willing to change its decade-long position.

The Hindu had learnt of an April 23 meeting to list Azhar at the U.N. which kicked off a silence period (when objections can be raised). The period ended on May 1 and following no objections from China this time, it went through.

The reasons for designating Azhar as a terrorist as per Wednesday’s listing included his support for the JeM since its founding, being associated with the al-Qaeda by recruiting for them and “participating in the financing, planning, facilitating, preparing, or perpetrating of acts or activities or supplying, selling or transferring arms and related material”. It also pointed to his role in recruiting fighters in Afghanistan. The JeM itself was sanctioned by the 1267 Committee in 2001.

U.N. decision in line with our position: MEA

Welcoming the decision, India called it a “step in the right direction”, which demonstrated the international community’s resolve to fight against terrorism and “its enablers”.

“This is in accordance with India’s position and in line with the information that India has shared with the members of the Sanctions Committee regarding terrorist activities of Masood Azhar and the JeM. India will continue with its efforts through international forums to ensure that terrorist organisations and their leaders who cause harm to our citizens are brought to justice” said Raveesh Kumar, Ministry of External Affairs (MEA) spokesperson.

Sources in the government called Pakistan’s statement on the dropping of Pulwama references as “mischievous”, and an attempt to “The objective has been the designation of “salvage something out of this huge diplomatic setback for them by diverting the narrative.”

“Pulwama happened to be the latest act of terror but the designation was not based on a specific incident but on the basis of evidence shared with members of the 1267 Sanctions Committee linking Masood Azhar to terrorism,” the sources said.

A western diplomat said the listing was a result of diplomacy by many partners and took concerns from all countries on board. According to the diplomat, the U.S. was key to pushing it through, aided by the U.K. and France, while Indonesia played an important role as the Chairperson of the UN Security Council.

The French government was the first to issue an official reaction to the listing, calling it the “successful realisation” of its efforts of several years.

Syed Akbaruddin, India’s Permanent Representative at the UN, said the listing was a significant outcome for India. “This is, for us, a significant outcome because we have been at it for several years. The first effort that we have made in this regard was in 2009. More recently, we have been persistent, diligent and in a subterranean manner, making all our efforts towards this goal. Today, that goal stands achieved.”

Asked why the Pulwama reference was dropped, Mr. Akbaruddin said: “That is a settled issue following the Security Council statement of February 21.” The Security Council had condemned the Pulwama attack and asked all states, without naming any, to cooperate with India and combat threats to international peace.

Indian-Americans up in arm against Congressman over Kashmir remark

Indian-Americans are up in arms against Democratic Congressman Tom Suozzi who has asked US Secretary of State Mike Pompeo to make Kashmir a major focus of the Trump Administration. In a letter dated August 9, Mr. Suozzi alleged that the action by the Indian government “risks provoking mass social unrest…” “These new restrictions on the […]

The remarks come as China and the U.S. have clashed over the origins of the pandemic, which has killed hundreds of thousands worldwide and upended life across the globe Source: thehindu.com Related

Sri Lanka’s President has pardoned a death-row prisoner, who murdered a Swedish teenager, just a week before he leaves office, Sparking national outrage. Convicted killer Jude Jayamaha, from a high-profile family, walked out of Welikada prison on Saturday. The court had been told the victim’s skull was fractured into 64 pieces. Sirisena, who is stepping […]