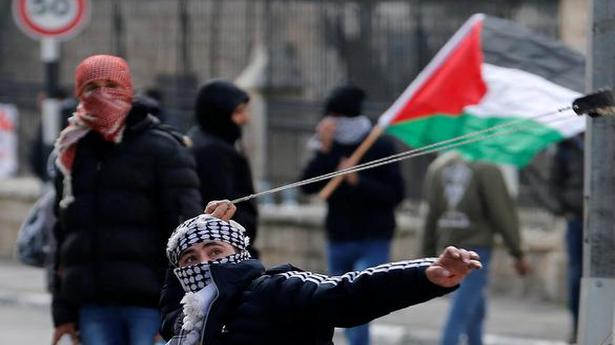 Flanked by Israeli Prime Minister Benjamin Netanyahu in the White House on January 28, Mr. Trump proposed a two-state solution and said no Israelis or Palestinians would be uprooted from their homes under his plan.

Describing it as historic and a “giant step” towards peace, he said that under his vision, Jerusalem “will remain Israel’s undivided, very important capital.” He proposed Palestinian capital in Eastern Jerusalem and that U.S. will set up its embassy there.

The Secretary-General has seen the announcement of the United States plan for the Middle East. The position of the United Nations on the two-state solution has been defined, throughout the years, by relevant Security Council and General Assembly resolutions by which the Secretariat is bound, a statement issued by UN Secretary-General Guterres’ spokesman said here on January 28.

“The world body remains committed to supporting Palestinians and Israelis to resolve the conflict on the basis of United Nations resolutions, international law and bilateral agreements and realizing the vision of two States — Israel and Palestine — living side by side in peace and security within recognized borders, on the basis of the pre-1967 lines.”

Mr. Trump said the plan calls for a four-year freeze in Israeli settlement activity and doubling of Palestinian territory.

Asserting that his peace plan will more than double the size of Palestinian territory, Mr. Trump said that Palestinian people deserve a far better life “than being trapped in a cycle of terrorism and violence”.

“My vision presents a realistic two-state solution,” he said.

Together we can bring a new dawn in the Middle East, Mr. Trump said as he urged the Palestinians to accept his deal and bring peace in the region.

Calling it a “historic opportunity” for the Palestinians to achieve an independent state, Trump said he has written to Palestinian President Mahmud Abbas on the matter.

No Palestinian official was present at the launch. The ambassadors from three Arab nations — Oman, the United Arab Emirates and Bahrain — were at the White House.

However, Mr. Abbas rejected Trump’s plan, saying it will “not pass.”

“After the nonsense that we heard today we say a thousand no’s to the Deal of The Century,” Mr. Abbas said during a press conference on January 28 in the West Bank city of Ramallah.

Mr. Netanyahu hailed Mr. Trump’s plan as “historic day” for Israel. The plan, he said, will strike the “right balance” where other plans have failed.

Mr. Netanyahu said that he is now willing to negotiate peace with the Palestinians “on the basis” of the U.S. peace.

China had largely contained local transmission of the virus before the Urumqi outbreak and has taken swift action to bring it under control. Source: thehindu.com Related

White House: Trump having tests as part of medical checkup

President Donald Trump was at Walter Reed National Medical Center on Saturday for what the White House said were medical tests as part of his annual physical. The appointment wasn’t on his weekend public schedule that was released Friday night, and his last physical was in February. Press secretary Stephanie Grisham said the 73-year-old Trump […]