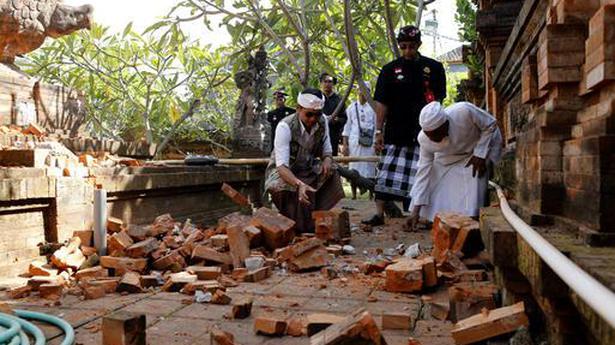 An undersea earthquake with a magnitude of 6.1 struck south of Indonesia’s Bali on Tuesday, the European earthquake monitoring agency EMSC said, causing some residents and visitors on the tourist island to briefly rush out of buildings.

There were no immediate reports of damage or casualties from the quake and there was no tsunami warning issued by the Hawaii-based Pacific Tsunami Warning Center.

The epicentre was 102 km southwest of the island’s capital, Denpasar, and was 100 km deep, the EMSC said.

The U.S. Geological Survey recorded the quake with a preliminary magnitude of 5.7.

One resident said people in Denpasar ran out of their boarding house in pyjamas after feeling the quake.

A Twitter user with the handle Indounik in the city of Ubud on Bali said the quake was “strong enough to make me adopt the drop, cover & hold approach recommended to survive a quake”.

Another Twitter user, Marc van Voorst, described the quake as feeing like “a heavy truck or train passing by at close range”. He said there was no panic, even though his hotel in the Uluwatu area shook quite a bit.

The quake could also be felt in other cities on the neighbouring islands of Lombok and Java, Indonesia’s meteorology and geophysics agency said in a statement.

Its Moluccas islands were hit by a powerful 7.2 quake on Sunday that killed at least two people and prompted hundreds to flee their homes.

The most devastating tremor in recent Indonesian history was on Dec. 26, 2004, when a magnitude 9.5 quake triggered a tsunami that killed around 226,000 people along the shorelines of the Indian Ocean, including more than 126,000 in Indonesia.

Eight people, including four children, were killed after a gas explosion destroyed a house in a ski resort in the south of Poland late on December 4, local authorities said. Around 200 rescuers had scoured the debris of the house in Szczyrk on the morning of December 5 to find the bodies. No one else […]

The second trial of Malaysian’s ex-Prime Minister Najib Razak linked to the multibillion-dollar looting of the 1MDB state investment fund was delayed Monday by a week to allow his first trial to end. Najib faces a total 42 charges of corruption, abuse of power and money laundering in five separate criminal cases brought since his […]

There’s no escape from the long arm of the law in Sweden. Not even sitting naked in a sauna. Police spokeswoman Carina Skagerlind said an off-duty police officer found himself sitting in the same sauna in Rinkeby, a Stockholm suburb, as a fugitive who had dodged a jail sentence for aggravated assault. Ms. Skagerlind said […]