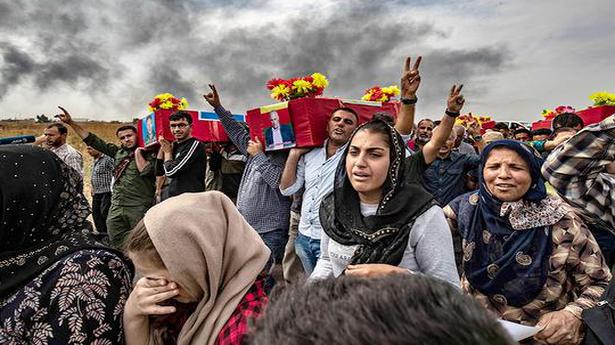 Turkish and Kurdish leaders accused each other of violating a U.S.-brokered truce in northeastern Syria even as it appeared to be taking hold on its second day on Saturday.

The deal announced late on Thursday is intended to halt a Turkish-led offensive against Kurdish forces launched on October 9, on condition they pull out of a “safe zone” on the Syrian side of the border.

The offensive has killed dozens of civilians, mainly on the Kurdish side, and prompted hundreds of thousands to flee their homes in the latest humanitarian crisis of Syria’s eight-year civil war.

On Saturday, Turkey accused Kurdish forces of violating the truce. “The Turkish armed forces fully abide by the agreement” reached on Thursday with the U.S., the Defence Ministry said in a statement. “Despite this, terrorists… carried out a total of 14 attacks in the last 36 hours,” it said, using its usual term for Kurdish fighters.

President Recep Tayyip Erdogan on Saturday warned that Turkey would “crush the heads” of Kurdish forces if they did not withdraw from a proposed safe zone along the border under the cease fire deal.

If the pullout does not happen by Tuesday evening, “we will start where we left off and continue to crush the terrorists’ heads,” Mr. Erdogan said in a televised speech in central Anatolian city of Kayseri.

In a wide-ranging interview with AFP, Mazloum Abdi, head of the Syrian Democratic Forces (SDF), said he still wished to see a role for the U.S. in Syria to counterbalance Russian influence, while recommitting his forces to countering the Islamic State group.

“The Turks are preventing the withdrawal from the Ras al-Ain area, preventing the exit of our forces, the wounded and civilians,” Abdi said in a phone interview from Syria.

Turkish troops and its Syrian rebel proxies seized part of the town on Thursday, hitting a hospital.

Turkey wants to push Kurdish fighters away from its southern border by establishing a 30 km deep “safe zone” on the Syrian side of the frontier.

A Britain-based war monitor said the Kurdish-led Syrian Democratic Forces (SDF) had yet to start pulling back on Saturday.

“The SDF have not withdrawn until now from any point,” the Syrian Observatory for Human Rights said.

SDF commander Redur Khalil said deadly bombardments by Turkey’s forces on Friday were a major breach of the truce and called on Washington to ensure Ankara honoured its side of the deal.

Diplomats said Iran is on course to breach a threshold in its nuclear agreement within days but U.S. President Donald Trump, who has ratcheted up pressure on the Middle Eastern country, said there was absolutely no time pressure on the issue. The prospect that Tehran could soon violate its nuclear commitments, a week after Trump […]

Gyms, swimming pools, sports centres in the country to reopen on May 25 Source: thehindu.com Related

Boeing says it has completed its updates to the flight-control software on the 737 MAX and tested it for more than 360 hours on 207 flights, after two deadly crashes resulted in the grounding of the aircraft globally, including in India. The 737 Max 8 and 9 models were grounded worldwide after an Ethiopian Airlines […]