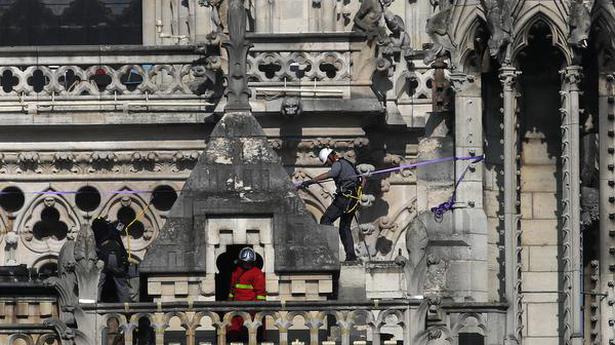 Two-thirds of the largely medieval roof of the famed Notre Dame cathedral in Paris have gone after the devastating fire, but United Nations cultural experts are standing by to offer help in rebuilding the iconic structure, UNESCO World Heritage Centre Director Mechtild Rossler said.

Ms. Rossler, who visited the site on April 16, told UN News that the Cathedral is a universal symbol and the centre of France and its devastation has left people across nations shocked.

She described seeing people praying outside the stricken symbol of the city and the nation, still trying to take in the scale of the disaster.

“I saw many, many people going from the Metro, to the site of Notre Dame, and I have to say many are still in a state of shock, because it’s not only the Christian community, it’s a building for all of us,” she said. “Really, it’s a universal symbol and it’s the centre of France. I think this is really shocking people profoundly and they lost something that is part of their identity.”

Ms. Rossler said that a team of UNESCO experts is on hand to investigate the stability of the stonework and potential damage to stained glass windows, echoing a statement by the UNESCO Director-General, Audrey Azoulay, in which she announced that a rapid damage assessment would be carried out as soon as possible with the authorities.

After visiting the site of Notre Dame on Monday night, Ms. Azoulay said we are all heartbroken.

The Cathedral is part of the World Heritage site officially known as Paris, Banks of the Seine, inscribed on the World Heritage List, in 1991. Notre Dame represents a historically, architecturally, and spiritually, outstanding universal heritage. It is also a monument of literary heritage, a place that is unique in our collective imagination, said the UNESCO chief, adding that the inferno which engulfed the cathedral, but appears to have left the medieval stonework intact, reminds us of the power of heritage that connects us to one another. “We are receiving messages of support from all over the world.”

The Cathedral, where construction began in the 1160s extending for more than a century, is considered to be the finest example of the French Gothic style of architecture, with its groundbreaking use of rib vaults and buttresses, stained glass rosettes and sculpted ornaments.

Trump to charge tax on companies manufacturing outside U.S.

Trump said that taxation was an incentive for the companies to return manufacturing bases to the U.S. Source: thehindu.com Related