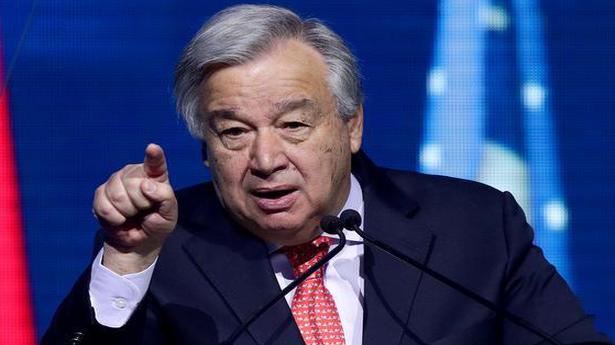 The United Nations may not have enough money for staff salaries next month if member states don’t pay what they owe, U.N. Secretary-General Antonio Guterres warned on Tuesday.

He told the 193-member U.N. General Assembly’s budget committee that if he had not worked since January to cut spending then “we would not have had the liquidity to support” the annual gathering of world leaders last month.

“This month, we will reach the deepest deficit of the decade. We risk … entering November without enough cash to cover payrolls,” said Mr. Guterres. “Our work and our reforms are at risk.”

The United States is the largest contributor – responsible for 22% of the more than $3.3 billion regular budget for 2019, which pays for work including political, humanitarian, disarmament, economic and social affairs and communications.

Washington owes some $381 million for prior regular budgets and $674 million for the 2019 regular budget. The U.S. mission to the United Nations confirmed the figures. It did not immediately respond to a request for comment on when it might pay.

U.S. President Donald Trump has said Washington is shouldering an unfair burden of the cost of the United Nations and has pushed for reforms of the world body. Mr. Guterres has been working to improve U.N. operations and cut costs.

U.N. spokesperson Stephane Dujarric said so far 129 countries had paid their dues for 2019, which amounted to almost $2 billion.

Mr. Guterres said he introduced extraordinary measures last month to cope with the shortfall – vacant posts cannot be filled, only essential travel is allowed, some meetings may have to be canceled or deferred. U.N. operations in New York, Geneva, Vienna and Nairobi and at regional commissions will be affected.

The United States is responsible for nearly 28% of the peacekeeping budget but has pledged to pay only 25% – as required by U.S. law. Washington currently owes some $2.4 billion for peacekeeping missions.

The top contributing countries are Ethiopia, India, Bangladesh, Nepal and Rwanda. They pay their troops according to their national salary scales and are reimbursed by the U.N. As of July 2019, the U.N. paid $1,428 a month per soldier.

The United Nations says its peacekeeping operations cost less than half of 1% of world military expenditures.

Jailed art dealer Subhash Kapoor has been charged by prosecutors in Manhattan with stealing and possessing millions of dollars worth of artifacts, with officials at the Metropolitan Museum of Art now looking into whether the looted antiquities sold by Kapoor have ended up in its collection. Kapoor was arrested by Interpol in Germany in 2011 […]

Finland’s parliament on December 10 approved the nomination of 34-year-old Social Democrat Sanna Marin as the world’s youngest serving Prime Minister. Out of the parliament’s 200 members, 99 voted in favour and 70 against her nomination. Thirty deputies were absent. “I want to build a society in which every child can become anything and in […]

A strong earthquake struck near the Philippine city of Davao on Sunday, killing a child, damaging buildings and causing several injuries, officials said, the latest in a series of tremors to strike the southern part of the country in recent months. The magnitude 6.8 quake was centred 61 km (38 miles) southwest of Davao on […]