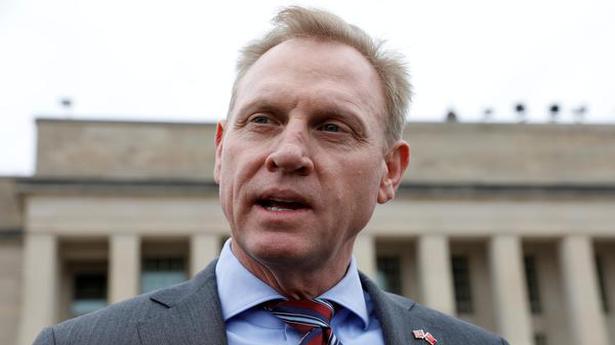 The US is increasing the scope, complexity and frequency of its military engagements with India, now a “Major Defence Partner”, Acting Defense Secretary Patrick Shanahan said Saturday.

Defence cooperation and peacekeeping are two key areas of the rapidly growing US-India partnership as envisioned in the Trump administration’s Indo-Pacific Strategy.

“US-India defence relations have strengthened significantly over the last decade, and India is now a Major Defence Partner. We are increasing the scope, complexity, and frequency of our military engagements, to include our first tri-service exercise later this year,” Mr. Shanahan said in his address to the Shangri-La Dialogue in Singapore.

The signing of the Communications, Compatibility, and Security Agreement or COMCASA last year was a historic development that enables the two countries to further expand their relationship toward more practical and meaningful areas of cooperation, he said.

The COMCASA will facilitate India to obtain critical defence technologies from the US, and access critical communication network to ensure interoperability among the US and the Indian armed forces.

It will also allow the installation of high-security US communication equipment on defence platforms being sourced from the US.

“Many of us stood together against imperialism, fascism, and Soviet domination in decades past. In many of these instances, China stood with us as a cooperative partner in pursuit of shared goals,” he said.

“I say now that China could still have a cooperative relationship with the United States. It is in China’s interests to do so: no country has benefitted more from the regional and global order than China, which has seen hundreds of millions lifted from poverty to increasing prosperity,” Mr. Shanahan said.

“We cooperate with China where we have an alignment of interests, from military-to-military dialogue to develop risk reduction measures, to tackling transnational threats such as counter-piracy, to enforcing UN sanctions on North Korea,” he said.

And the US competes with China where it must. But competition does not mean conflict. Competition is not to be feared. We should welcome it, provided that everyone plays by internationally established rules, he said adding that China can and should have a cooperative relationship with the rest of the region, too.

But behaviour that erodes other nations’ sovereignty and sows distrust of China’s intentions must end, he said.

“Until it does, we stand against a myopic, narrow, and parochial vision of the future, and we stand for the free and open order that has benefitted us all, including China,” he warned.

The US and China, the two world powers, are locked in a tussle for the commercial control of South China Sea, which serves as a passage for annual trade worth $3.5 trillion.

China claims almost all of the strategic South China Sea with Brunei, Indonesia, Malaysia, the Philippines, Taiwan and Vietnam pushing competing claims to parts of the resource-rich maritime region.

Islands in the South China Sea – is an area which accounts for 12 % of global fishing and through which 30 per cent of the world’s trade passes, apart from housing possible oil and gas reserve.

Britain’s two major political parties suffered heavy losses in local elections that took place across England and Northern Ireland this week, in a development that some attributed to their stance on Brexit, while others saw it as a continuation of the fragmentation of politics that had been under way before the Brexit referendum, but saw […]