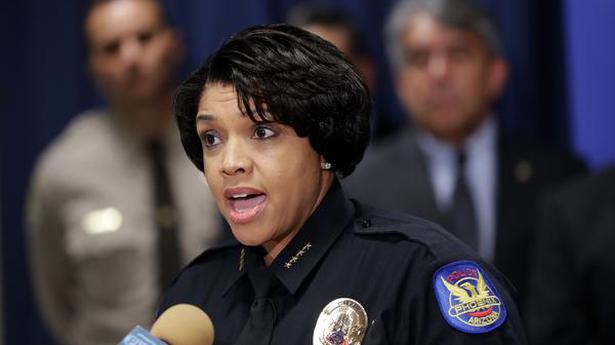 The mayor of Phoenix apologised on June 16 after videos emerged showing police in the southwestern US city violently arresting a family with young children.

The videos, shot when the arrest happened last month, show police using foul language while shouting at the family to get out of their car, and threatening to shoot them.

A woman later emerges from the vehicle with two young children. She hands them over to a bystander before being arrested.

Separately, an officer is shown kicking the legs of another man who he is handcuffing against a police car.

“I, like many others, am sick over what I have seen in the video depicting Phoenix police interacting with a family and young children,” Mayor Kate Gallego wrote in a statement posted on Twitter.

Calling the officers’ actions “inappropriate” and “clearly unprofessional,” she wrote, “There is no situation in which this behaviour is ever close to acceptable.” “I am deeply sorry for what this family went through, and I apologise to our community,” she said.

In an appearance on the local ABC affiliate, Phoenix police chief Jeri Williams said the officers had responded to a report of shoplifting when they encountered the family.

“I’m sorry this incident happened,” she said, adding that it was being investigated.

ABC reported that the family has filed a $10 million claim against the city, alleging civil rights violations.

The incident comes amid heightened scrutiny of law enforcement in the public in the United States following a series of high-profile killings of African Americans.

In response, departments across the country have announced reforms such as requiring officers to wear body cameras, which Gallego said Phoenix would speed up in the wake of the controversy.

The World Bank is offering technical assistance to China to help battle the coronavirus epidemic but no new loans, the development lender’s president, David Malpass, said on Monday. Malpass told Reuters the bank was working with the World Health Organization (WHO) to aid China, including offering advice about past health crises, but did not plan […]

South Korea is exploring all options in a bitter trade row with Japan, including scrapping an intelligence sharing pact, but wants a cooling off period with Tokyo, a senior South Korean official said on Saturday. The trade row escalated on Friday when Japan removed South Korea from a favoured trading nations list, prompting Seoul to […]

Beneath show of bonhomie, rifts emerge between Donald Trump and Western allies at G7 summit

US President Donald Trump insisted on Sunday that he was getting along well with leaders at a G7 summit in France, but rifts emerged with his Western allies on issues ranging from his trade war with China to Iran, North Korea and Russia. The G7 gathering is taking place against a backdrop of worries about […]